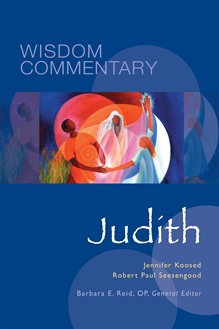 The striking scene of Judith cutting off Holofernes’s head with his own sword in his own bed has inspired the imaginations of readers for millennia. But there is more to her story than just this climatic act and more to her character than just beauty and violence. This volume offers a comprehensive examination of gender ideologies in the book of Judith, from the hyper-masculine machinations of war and empire to the dynamics of class in Judith’s relationship with her enslaved handmaid. Overall, this commentary investigates the book of Judith through a feminist lens, informed by critical masculinity studies, queer theory, and reception criticism.

Jennifer L. Koosed is professor of religious studies at Albright College in Reading, Pennsylvania. She is the author of several books, including (Per)mutations of Qohelet: Reading the Body in the Book (Continuum, 2006); Gleaning Ruth: A Biblical Heroine and Her Afterlives (University of South Carolina, 2011); and Reading the Bible as a Feminist (Brill, 2017). She is also the editor of several works, including The Bible and Posthumanism (SBL Press, 2014) and Reading with Feeling: Affect Theory and the Bible (with Fiona C. Black; SBL Press, 2019).

Robert Paul Seesengood is associate dean of academic affairs and associate professor of Bible and cultures at Drew Theological School. He received his ThM (New Testament) from Princeton Theological Seminary and his PhD (History of Ancient Christianity) from Drew University. He is a frequent lecturer, an editor, and an author of several essays and monographs, including Philemon (Bloomsbury, 2017), Paul: A Brief History (Wiley-Blackwell, 2010), and, with Jennifer L. Koosed, Jesse’s Lineage: The Legendary Lives of David, Jesus and Jesse James (T & T Clark, 2013).