Wisdom Commentary: Baruch and the Letter of Jeremiah 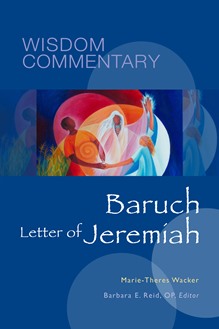 Baruch and the Letter of Jeremiah are among the so-called deuterocanonical books of the Bible, part of the larger Catholic biblical canon. Except for a short article in the Women's Bible Commentary, no detailed or comprehensive feminist commentary on these books is available so far. Marie-Theres Wacker reads both books with an approach that is sensitive to gender and identity issues. The book of Baruch—with its reflections on guilt of the fathers, with its transformation of wisdom into the Book of God's commandments, and with its strong symbol of mother and queen Jerusalem—offers a new and creative digest of Torah, writings, and prophets but seems to address primarily learned men. The so-called Letter of Jeremiah is an impressive document that unmasks pseudo-deities but at the same draws sharp lines between the group's identity and the "others," using women of the "others" as boundary markers.

Marie-Theres Wacker is professor of Old Testament and women's research at the Faculty of Catholic Theology, University of Muenster, Germany. She is director of the Seminar for Old Testament Exegesis and runs a research unit for gender studies in theology. Her fields of teaching, research, and publication include feminist biblical hermeneutics, biblical monotheism, early Jewish writings from Hellenistic times, and reception history of the Bible. Together with Luise Schottroff, she edited Feminist Biblical Interpretation: A Compendium, a feminist commentary on the Christian Bible and selected noncanonical writings.

"Marie-Theres Wacker deals with two short biblical books that are relatively unknown to most readers and little studied within academic and church circles, and she discovers in them important gems of wisdom for our day. In her commentary, the close reading of the Greek text is brought into dialogue with feminist, postcolonial, and interreligious concerns. The supplementary contributors make these concerns concrete as they relate, for instance, the failures of the `fathers and rulers' (Bar 2:1) to the crisis of sexual abuse in the church, or place the mockery of idols in the Epistle of Jeremiah in dialogue with the voice of Dalit women from India today. This commentary will certainly lead many of us to pay much more attention to these short but challenging books."
Eileen Schuller, McMaster University, Hamilton, Ontario, Canada

"The commentary is written at a level that should be accessible to most readers and is well footnoted for those who would want to pursue further study of these books. Among its strengths is its identification of a great many intertextual relationships with biblical literature, while it argues clearly Baruch's identification with Torah. Discussion of gendered language and other feminist concerns does not obtrude and the commentary may be recommended as a useful guide to these texts, helpful not least to those whose tradition does not regard Baruch of the Letter of Jeremiah as scripture."
George Nicol, Journal for the Study of the Old Testament

"Wacker's careful scholarship and accessible writing, along with the pluralistic viewpoints of the `Contributing voices,' invite the reader to ponder Israel's struggle for identity without oppressive harmonizing. May we embrace such a model in our own identity struggles today."
Interpretation: A Journal of Bible and Theology

"The combined accessibility of the writing and the depth of the reflections on the text make this volume an excellent resource for all those approaching the text of Baruch and the Letter of Jeremiah as catalysts for theological reflection in the modern world."
Nicholas R. Werse, Catholic Books Review

"Of interest is a series of reflections on the parallels between the `guilt of the fathers' in Baruch and the guilt of the Roman Catholic hierarchy in its role in covering up sexual abuse by priests. Wacker shows how these ancient books are still applicable today."
Waterwheel

"Marie-Theres Wacker's commentary combines philological-historical study of Baruch and the Epistle of Jeremiah with an engaging quest for how these texts might be read today. It both explores the ongoing relevance of these books and encourages critical examination of their rhetoric and ideology. This is a powerful commentary stimulating interaction with these texts from a variety of perspectives, including feminism, gender sensitivity, and postcolonial criticism."
Lutz Doering, University of Münster