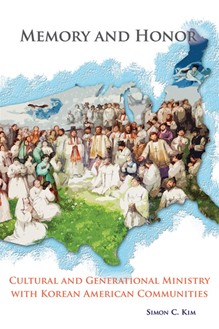 Memory and Honor is a theological reflection on the American experience of the people of Korean descent. It is a reflection on the heritage of rupture, displacement, and resettlement as the key to identity and hope for those continuing to live in between the cultures, languages, and belief systems of Korea and the United States.

This book gives voice to the first generation of immigrants and their children. Since the majority of Korean immigrants are Protestants, the first- and second-generation Catholic community is a minority of minorities, an ethnic minority as well as a religious minority. Thus, as a minority group and as a minority of minorities, Korean American Catholics may have more to contribute to church and society since this country was founded, developed, and maintained by immigrants such as these. Readers will come away with a deeper appreciation of the Korean immigrant contribution and more readily see the Korean American Catholic community as an authentic expression of church.

Simon Kim is assistant professor of theology at Our Lady of Holy Cross College in New Orleans, LA. He earned a Ph.D. in theology from The Catholic University of America in 2011, specializing in theology in cross-cultural contexts. He works extensively with Korean American communities and offers conferences, workshops, and retreats across the country on Korean American pastoral ministry.