Theological and Pastoral Implications of Contemporary Developments in Science 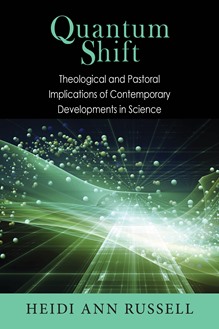 While the field of science has made incredible advances in the past century, and more and more scientists have gone to great lengths to make these developments accessible to the public, we still rarely hear ministers and communities of faith discussing the implications of these developments for the life of faith. Quantum Shift explores recent developments in science from relativity to quantum mechanics to cosmology and then suggests ways in which people of faith might engage these scientific developments to foster their understanding of God and what it means to be part of the world we believe God created. Heidi Ann Russell demonstrates how these scientific developments offer us new and exciting images that spark our theological imaginations and reinvigorate our spiritual lives. Includes illustrations.

Heidi Ann Russell, PhD, is an assistant professor at the Institute of Pastoral Studies of Loyola University Chicago. She received her PhD in religious studies from Marquette University and her MDiv/MA from Washington Theological Union. She is the author of the book The Heart of Rahner as well as articles in Theological Studies, Horizons, Science and Theology, Buddhist Christian Studies, and Philosophy and Theology.

In Quantum Shift, Heidi Russell provides an insightful look into the implications of contemporary scientific research for theology and ministry. This work helps to advance the important idea that it is possible to be a deeply committed person of faith and still appreciate contemporary scientific inquiry. The pastoral application of scientific and theological insights that she offers are also a particularly valuable contribution for both theologians and pastoral ministers and stands out among other recent works on the relationship between theology and science.
Theodore James Whapham, Dean, School of Ministry and Associate Professor, University of Dallas

"Russell's work is a significant contribution to the field, even if pastoral ministers working with her text still have to exert considerable effort at applying these insights to preaching and catechesis. Her work is creative and evocative, and well worth serious consideration."
Catherine Vincie, RSHM, Theological Studies

"The book can be heavy going, particularly when she tries to weave the difficult language of quantum physics together with the perhaps even more difficult language of Karl Rahner's theology. As an introductory tour of modern physics from a theological perspective, however, the book is valuable."
J. Peter Nixon, U.S. Catholic

Heidi Russell's book Quantum Shift is an engaging, informative, and often profound glimpse into the way in which the worldview produced by quantum physics can alter and invigorate our conceptions of God and creation. Charting a course between innovation and tradition, Russell offers novel vocabulary and fresh perspectives for theologians, pastoral ministers, and other persons of faith seeking to navigate the implications of the new sciences for religious belief. Eminently readable and replete with examples to concretize sometimes abstract concepts, Russell's work is sure to whet the reader's appetite for more science and to slake the reader's thirst for the more expansive and dynamic insights into God and the God-world relationship afforded by this scientific worldview. Ephphata—and enjoy!
Gloria L. Schaab, Barry University

One of the great regrets of history occurred in the seventeenth century's split of science and religion between the church and Galileo. It has been said that without this split we would have had better science and better religion. Heidi Russell not only offers us the best of science and religion of the twenty-first century but recasts for us their whole relationship. Instead of contending their truths, she engages the rich analogies that each has to offer in the pursuit of love/relationality. This is an utterly pastoral approach to science and theology, "rejuvenating what it means to be the body of Christ as inherent connectedness to all of creation impacting our understanding of social and environmental justice."
Bob O'Gorman, Professor Emeritus, Loyola University Chicago

In his revolutionary encyclical, Laudato Si', Pope Francis called everyone on Earth to conversion at the level of conscience to a connected way of being and acting, because to do otherwise is to live in a false reality: `Everything is connected' (90). In this book, Heidi Ann Russell builds on the important academic premise that `there is a universal basis for our understanding and, since that basis cannot be self-contradictory, the understanding one has from one discipline should complement that which one has from all other disciplines.' Russell's work is exemplary in that she models this converted way of thinking in every chapter. In so doing, she opens compelling new insights into traditional tenets of the Christian faith. In her hands, complex concepts of science-quantum mechanics, chaos theory, modern cosmology, etc.-are made accessible and the portal of entry into dialogue with the Christian tradition. Russell's engaging, dynamic, infectious dialogue draws the reader toward religious renewal that supports a connected lifestyle. It is a must-read-for the sake of God's people and the planet!
Dawn M. Nothwehr, OSF Erica and Harry John Family Endowed Chair in Catholic Theological Ethics Catholic Theological Union Chicago, IL