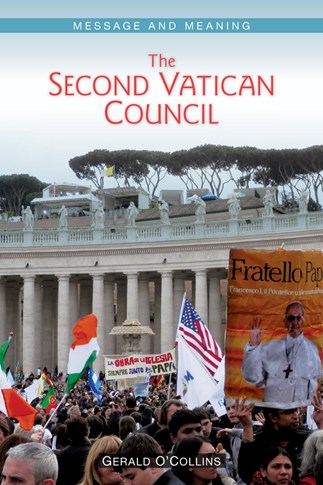 Convened by Pope John XXIII, the Second Vatican Council (1962-65) profoundly changed the self-image and life of the Catholic Church. But understanding, interpreting, and implementing Vatican II still remain a task far from completed. Pope Francis has given fresh impetus toward practicing the Council's teaching about a humble, servant Church that pursues justice and peace for the whole world.

This book explores and presents Vatican II's developments in doctrine about divine revelation; the nature, mission, and collegiality of the Church; religious freedom; and the divine grace that reaches all human beings. It takes up the profound significance of the liturgy constitution, which opened the way for the Council's subsequent teaching.

In documenting the renewal and reform conveyed by the message and meaning of Vatican II, this book illustrates the scholarship and accessible style for which Gerald O'Collins has become renowned.

Gerald O'Collins, SJ, is an adjunct professor at Australian Catholic University and a research fellow at the University of Divinity in Melbourne. He taught at the Gregorian University in Rome for thirty-three years and is well known as a lecturer and broadcaster around the world. Fr. O'Collins has had hundreds of articles published in professional and popular journals and authored or co-authored sixty-two books.

Once again, Gerald O'Collins brings his masterful expertise in Church history, in biblical theology, and in fundamental theology together to tell in a nuanced way the story of Vatican II-how it came about, those who played a central role, and the key theological themes running through the documents. One generation has passed and another is well established since the Council's closing in 1965. As noted by O'Collins, its teaching is still being received and tested in the lives of believers. This book is a major contribution to the ongoing telling of that story.
Sr. Maureen Sullivan, OP, Professor of Theology, St. Anselm College

The work of Gerald O'Collins, particularly this book, is a wonderful example of the vitality of the theology of Vatican II in light of the New Evangelization. It is also a much-needed correction to the unnecessary controversy that has recently surrounded Vatican II in some ecclesiastical quarters.
Massimo Faggioli, Author of True Reform: Liturgy and Ecclesiology in Sacrosanctum Concilium

"This book is timely and worth reading. It revives the teaching of Vatican II and calls for further involvement in bringing to fruition the Council's hopes and deliberations."
Quinbert Kinunda, MAfr, St Joseph's Theological Institute, Cedara, Grace & Truth

By any measure Gerald O'Collins has been at the forefront of Catholic theology in the post-Vatican II era. His voluminous writings have put all those seeking a deeper understanding of Christian faith in his debt. The Second Vatican Council: Message and Meaning proceeds from O'Collins's conviction that "much in what the Council taught remains to be appreciated and practiced." These lucid, insightful, indeed, magisterial essays are a precious guide toward a fuller appreciation and appropriation of the significance and implications of this epochal Council.
Robert P. Imbelli, Boston College (Emeritus), author of Rekindling the Christic Imagination: Theological Meditations for the New Evangelization

Gerald O'Collins, SJ, is one of the leading figures in the English-speaking theological world in our time and an eminent interpreter of the Council. In this volume, which brings together a number of previously published articles, his fifty years of penetrating and insightful scholarship are brought to bear on an examination of the radical changes, in some cases reversals, in teaching and policy that the Council announced and to questions of the message and meaning of the Council. . . . O'Collins's scholarship rightly commands the attention of scholars as well as students worldwide, and this most welcome book will undoubtedly serve to further the reception of the Council and the trajectories it initiated.
Anne Hunt, Executive Dean, Faculty of Theology and Philosophy, Australian Catholic University

"For fifty years I have been studying Vatican II; yet the documents can still astonish me with the golden bits" (xi). [This] book is a treasure trove of those golden bits. . . . A particular strength of the book is the way it investigates a theme across all the documents, beyond its treatment within the specific document devoted to that theme–for example, "revelation" in Dei verbum. . . . I highly recommend the book for a wide range of readers, from theologians to educated nontheologians, as a valuable contribution to the literature on the Second Vatican Council.
Ormond Rush, Australian Catholic University, Brisbane, Theological Studies

Gerald O'Collins has provided in this volume a stimulating series of reflections on many of the most important themes of the Second Vatican Council that are of particular significance for ongoing renewal of the church. If not every relevant text is cited . . . his careful reading of major documents, and his clear analysis of central themes that frequently connect these documents is ways that provide a broad perspective on the teaching of the council as a whole, are not only a fitting celebration of the fiftieth anniversary of the council but an incentive to an intellectual and pastoral recommitment to the vision of Vatican II.
Patrick F. O'Connell, Catholic Books Review