Political Cultures of the Church in the Twenty-First Century 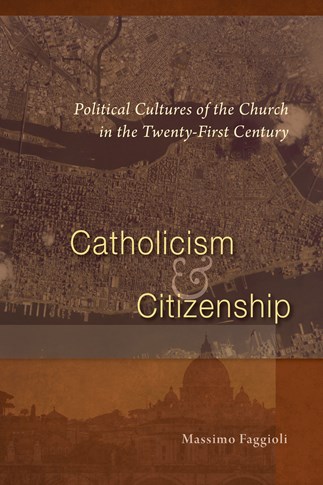 "Catholicism and Citizenship is a concise book that represents the fruit of lectures presented by the author. Hope and insight never fail to radiate from each page."
Pastoral Liturgy

"Faggioli's volume is a must read both for its layout of Vatican II's political ecclesiology and the effort to make it integral for contemporary Catholic consciousness, as well as for its further bibliographical suggestions."
New Theology Review

"The prolific and polyglot historian Massimo Faggioli argues in this book that Francis is `the first post-conciliar pope.' Faggioli claims that the church, no longer seeking political or cultural hegemony, must go out to the world to show mercy in diverse forms of dialogue and service."
The Living Church

"Catholicism & Citizenship, does not offer just another book about the church and the temporal world. Rather, it promises a challenging exploration of the saeculum's bewildering contradictions, and it graduates a half-century-old theological reflection into an urgently present injunction to respond to the world as it is."
Steven P. Millies, Catholic Theological Union

"With this book, Massimo Faggioli cements his reputation as his generation's premier interpreter of the relationship between American Catholics and the Church in Rome. He is incisive, insightful, and unfailingly constructive in his observations."
Cathleen Kaveny, Libby Professor of Law and Theology, Boston College

"The book is very well-written and deals with Pope Francis' papacy in light of his view of Guadium et spes. The purpose of the book, Faggioli states, is to look at Catholicism in the modern world, as it has changed so much since Vatican II."
Catholic Press Association award, second place

"Faggioli is the most articulate interpreter of American Catholicism today. Catholicism and Citizenship is an instructive and sobering call to action."
Christian Century

"Faggioli has given us a very thoughtful short volume that would provide an excellent text for university and theological school courses and selective parish adult discussion groups. I find his volume a gem."
Catholic Library World

"Catholicism and Citizenship is excellent historiography, a synthetic scholarly survey of historians' findings and theologians' insights. All readers will find in its voluminous notes other books they would like to read; doctoral students will discover dozens of dissertation topics to explore; and scholars, arguments to pursue. General readers will meet provocative, new perspectives on the history and reality of the church in our time. All in all, a genuinely rich read."
America

"In Catholicism and Citizenship, an accomplished historian of the Vatican II Church situates the novelty of Pope Francis's orientation—and the resistance it has provoked—on the complex, changing, and disturbing terrain of global politics and `the crisis of the nation state.' Francis envisions the Church as an engaged member of world society—missionary and prophetic, yet nonideological and inclusive. To those dismayed by public vitriol, worried about international politics, or doubtful that the Church can change the world, this book will bring new breadth of insight and encouraging seeds of hope."
Lisa Sowle Cahill, Boston College