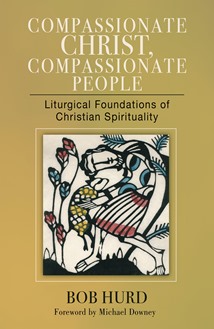 "Deeply grounded in Scripture and demonstrating deft command of insights provided by Karl Rahner and Louis-Marie Chauvet, Bob Hurd's Compassionate Christ, Compassionate People articulates a Christian spirituality, that, nourished by liturgical practice, moves with the spirit of God moving within us. Hurd's account of liturgy ties the love that moves Dante's stars with the love that God summons us to practice in the human village."
Timothy Brunk, Associate Professor of Theology, Villanova University

"You have enjoyed singing Bob Hurd's liturgical music. Here is your opportunity to enter the fruitful mind of this faithful Christian. You will explore not only the workings of worship, but also the God whom worship encounters. Hurd's book will help you appreciate why his music so powerfully draws you into Christian prayer."
Fr. Paul Turner, Pastor, Cathedral of the Immaculate Conception, Kansas City, Missouri

"I have read other books on the topic of Eucharist and living a just life by some very fine authors. Bob Hurd's book is outstanding in its category. It is well-written, interesting, organized, clear, ecumenically-focused, theologically-rich, and liturgically-challenging. Hurd offers fresh insights on familiar topics, moving easily from poets, playwrights, theologians, and spiritual writers. His treatment of Louis-Marie Chauvet makes this contemporary theologian comprehensible and accessible to the average reader. Coming from a person who has spent a lifetime composing texts and music for worship, this book is clearly the fruit of study, personal prayer, and liturgical celebrating. I hope to adopt it for a graduate course next semester and encourage professors of liturgy and sacraments to give it a close look. Very highly recommended!"
Judith M. Kubicki, CSSF, Associate Professor of Theology, Fordham University