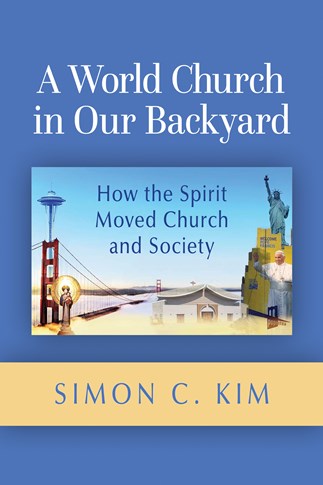 A World Church in Our Backyard

How the Spirit Moved Church and Society
Simon C. Kim

How did a culturally diverse world church emerge in our local neighborhoods and backyards? Rather than an accidental coincidence, diversity in our country, neighborhoods and pews was intentionally brought about through the Spirit's prompting of historical events. The jubilee of the Second Vatican Council (1962-1965) reminded us how the Catholic Church opened her doors to the world, while the Immigration and Naturalization Act of 1965 revealed how the U.S. opened her shores to migrants around the world. Through both ecclesial and legislative reforms, the U.S. became home to many ethnically diverse people and allowed for the creation of a worship space incorporating their cultural backgrounds.

As a theologian of culture, Simon C. Kim focuses on doing theology within a particular context. His own experience of church and identity is the impetus for his theological reflections as he strives to make faith generationally and culturally relevant. His stories, experiences, and theological reflection resonate both with initial immigrants and with the next generation and have won high praise from both groups as they draw on their Catholic faith to navigate their way in Church and society. His publications reveal his level of academia and illustrate the bridging of his theological endeavors and pastoral engagements.

"This book is small if measured by pages alone; its brevity, however, is no obstacle to its largeness of vision and enthusiasm. The book is a welcome contribution to contemporary ecclesiology."
Richard Lennan, Theological Studies


"Only recently have these Asian Catholics attracted the attention of scholars, especially in sociology and anthropology, although much less so in church history and theology. Kim's book fills this void, although his treatments of them in chapters 6 (the Vietnamese), 7 (the Filipinos), and 8 (the Koreans) could easily be expanded into book-length treatises."
Peter C. Phan, Worship


"Simon Kim expands the story of the Catholic Church in the United States beyond the more familiar narratives of European and Latin American immigration to show the unique gifts that Asian Catholics bring. More than just history or sociology, Kim narrates the confluence of Vatican II, immigration reform, and the civil rights movement in the 1960s as movements of the Holy Spirit, the fruits of which we are just beginning to appreciate today. This book is a timely and beautiful contribution to unity through diversity in the US Catholic Church."
William T. Cavanaugh, DePaul University


"As he did in his previous book Memory and Honor, in A World Church in Our Backyard, Simon C. Kim has given us a book that we really needed! Kim begins to fill in the problematic gaps in our theological and cultural understanding of contemporary immigration and cultural diversity in the United States, especially in reference to the smaller but more rapidly growing migrations from East Asia and the Pacific. For Kim, Vatican II is a critical transition point not only in the Church's approach to the world (as often assumed and here explored in theological depth) but also in the US Church's approach to immigration and immigrants. He invites us to examine both of these re-orientations not just as watershed moments for Church leadership but as changes in Catholic ecclesiology itself. The book also examines the immigration narratives of Korean, Vietnamese, and Filipino Catholics in the United States, presenting them without surrendering to essentialist ge neralizations but also engaging them critically in the search for a unity that is not uniformity, that respects our ever-evolving cultural differences."
Brett C. Hoover, Assistant Professor of Theological Studies, Loyola Marymount University


"This book is a careful reflection of the courageous theological journey from Vatican II to its impact on Asian immigrant communities in North America. It is truly a development to be celebrated."
Wonsuk Ma, Oxford Centre for Mission Studies, Executive Director, David Yonggi Cho Research Tutor of Global Christianity