The Mind of Pope Francis 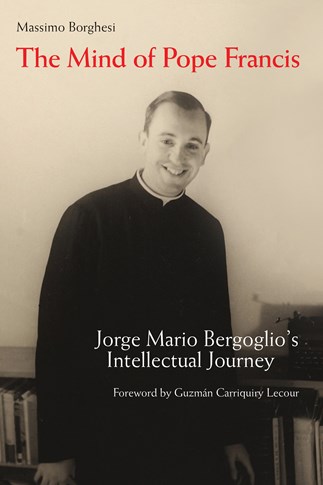 A commonly held impression is that Pope Francis is a compassionate shepherd and determined leader but that he lacks the intellectual depth of his recent predecessors. Massimo Borghesi's The Mind of Pope Francis: Jorge Mario Bergoglio's Intellectual Journey dismantles that image.

Borghesi recounts and analyzes, for the first time, Bergoglio's intellectual formation, exploring the philosophical, theological, and spiritual principles that support the profound vision at the heart of this pope's teaching and ministry. Central to that vision is the church as a coincidentia oppositorum, holding together what might seem to be opposing and irreconcilable realities. Among his guiding lights have been the Jesuit saints Ignatius and Peter Faber; philosophers Gaston Fessard, Romano Guardini, and Alberto Methol Ferrer; and theologians Henri de Lubac and Hans Urs von Balthasar.

Recognizing how these various strands have come together to shape the mind and heart of Jorge Mario Bergoglio offers essential insights into who he is and the way he is leading the church. Notably, this groundbreaking book is informed by four interviews provided to the author, via audio recordings, by the pope himself on his own intellectual formation, major portions of which are published here for the first time.

Massimo Borghesi is professor of moral philosophy at the University of Perugia. He is the author of several books, including volumes on Augusto del Noce, Luigi Giussani, and political theology. This is his first book to be published in English.

Guzmán Carriquiry Lecour is an Uruguayan Roman Catholic activist, a distinguished professor, an attorney, and has been the leader of the Catholic youth and university student movements in Uruguay. In 2005, he wrote a major work on the Catholic Church in Latin America, Una apuesta por America Latina (A Commitment to Latin America) published by Sudamericana, that has an introduction by Jorge Bergoglio. In 2014, Pope Francis appointed him vice president for the Pontifical Commission for Latin America.

"Massimo Borghesi's book is the first real intellectual biography of Jorge Mario Bergoglio and it builds a bridge between the different universes of today's global Catholicism: different generations of Catholics; different areas of the world; different theological, philosophical, and socio-political backgrounds. This book is an invaluable contribution for the comprehension of this pontificate and potentially a game-changer for the reception of Pope Francis, especially in the English-speaking world."
Massimo Faggioli, Professor of Historical Theology, Villanova University

"In the ever-growing literature regarding the Pope and his actions, Borghesi's work represents a unique contribution for it explores paths up to now left untraveled. While the breadth of his project is so vast that the reader is left at times wanting for more details and nuanced analyses, this book is an indispensable resource for all those who wish to understand and engage with Francis."
Catholic Books Review

"This book is an in-depth study centering on Pope Francis and his intellectual status. This book would be well worth a read for those who seek to know more about the Pope, how he has been trained intellectually and how he uses those capabilities today."
Catholic Press Association

"Borghesi helps us to see that Pope Francis's originality comes not only from the depth of his intellectual formation, but also from his practice of looking for the resolution of conflicts not only through careful listening and thoughtful reflection, but also through prayerful discernment. It is exactly the kind of originality one might expect from the first Jesuit pope."
J. Matthew Ashley, University of Notre Dame, America

"Pope Francis' predecessor was an internationally renowned theologian. Perhaps because of that, many have dismissed the Argentinian pope as lacking in intellectual `heft.' Massimo Borghesi's fascinating and informative study of the intellectual influences on Pope Francis has exploded that canard, demonstrating the intellectual breadth, subtlety and perspicacity of Francis' thought. Borghesi helps us see that behind Pope Francis' famous `evangelical simplicity' lies `a rich and original thought process,' one informed by such thinkers as Amelia Podetti, Alberto Methol Ferre, and Romano Guardini. Thanks to Borghesi we can better appreciate the subtle and creative mind of this `simple' pope."
Richard Gaillardetz, Joseph Professor of Catholic Systematic Theology, Boston College

"Reading this book, one is left with a deep sense of Pope Francis's intellectual curiosity and aptitude, as well as his originality. Borghesi succeeds in providing a compelling survey of the pope's various intellectual sources, and in suggesting how they contributed to his fundamental understanding of the world and the church."
Commonweal

"If Massimo Borghesi's book, The Mind of Pope Francis, had been published earlier in the pontificate it could have helped prevent the surprisingly easy adoption of a superficial narrative depicting the new pope as an intellectual lightweight set on undoing much of what his predecessors had accomplished. An important and unique contribution to the books that have been written about him."
Cindy Wooden, Chief of Rome Bureau, Catholic News Service

"Massimo Borghesi has provided an indispensable resource for all who want to understand why Pope Francis thinks the way he does. Both erudite and scholarly, A Mind of Pope Francis reveals the intellectual and cultural formation of Jorge Mario Bergoglio, with the added benefit of recently recorded and highly reflective interviews with the subject himself. Beautifully translated, this is a vital addition to the anthology of books on this most captivating and consequential religious leader."
Kerry Alys Robinson, Global Ambassador, Leadership Roundtable

"The English edition of Borghesi's work goes beyond previous books about Pope Francis, not only by including material from private interviews with the Holy Father, but also by opening to English-speakers the thinking of men and women like Alberto Methol Ferré and Amelia Podetti, philosophers from Latin America, who deeply influenced Pope Francis and his ideas about the holy, faithful, People of God and about listening to those at the peripheries. The work of Borghesi is a wonderful contribution to understanding the thinking and person of Pope Francis and to receiving and implementing his magisterium at a time of change in the Church and the world. It is my sincere hope that bishops, priests, seminary professors, lay theologians and leaders will profit greatly from this text as they carry out the important work of the New Evangelization."
Archbishop Christophe Pierre, Apostolic Nuncio to the United States

"Borghesi provides readers with the tools to enter `the dialectic of oppositions' in Bergoglio's thought."
The Furrow

"Massimo Borghesi's The Mind of Pope Francis is an exceptional intellectual biography. It's a deep dive into Latin American philosophers and theologians—figures largely unknown to me—who shaped the mind of the now pope. For anyone seeking an honest understanding of who shaped and now motivates Francis, this is a must read."
Christopher White, Crux

"Far from being just a set of ideas and influences, what Professor Borghesi's magnificent study shows is a way of thinking, one that navigates and reconciles this world's polarities and dialectic tensions in a compellingly original way. If ever a mind reflected the Incarnation, it is Jorge Mario Bergoglio's; and no one is better equipped to take us on a tour of that mind than Borghesi in this masterful translation. There is no more important or illuminating book on Pope Francis. We will never see him the same way again."
Austen Ivereigh, Author of The Great Reformer: Francis and the Making of a Radical Pope

"Any Catholic thinker, priest, or seminarian who wants to grasp the intricacies of the intellectual formation of Pope Francis has to read this book. Even the best biographies have up to now been unable to recount the true influence of Gaston Fessard, Amelia Podetti, and Alberto Methol Ferré. This book was hard to put down. The interplay of the modern dialectic and classical analogy under the rubric of Jesuit polarity is itself worthy of a small monograph. The record is now corrected. Friends and foes can learn for the first time the multiple and diverse strands of Latin American, Ignatian, and European thought that the inquisitive Bergoglio brought from the Southern Cone of his native hemisphere to the chair of St. Peter."
Peter Casarella, University of Notre Dame

"An indispensable study of how Jorge Bergoglio became the strikingly original thinker and believer who has renewed the Church in his ministry as Pope Francis."
Mollie Wilson O'Reilly, Editor at Large, Commonweal