An Introduction to Christian Ethics 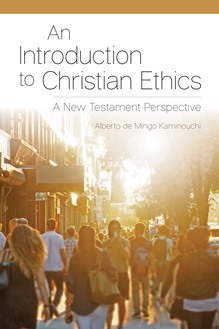 What does it mean to live and build up the Kingdom of God? In this book, professor and priest Alberto de Mingo Kaminouchi introduces the contemporary reader to Christian ethics by examining the New Testament through the three key concepts of Aristotle’s ethics: happiness, virtue, and love.

In turn, the three affirmations orient this reflection through the Gospel. First, when the triune God appears on the horizon, it becomes easier to understand that existence has a purpose: namely, participating with the entire human family in this project of happiness called the Kingdom of God. Second, happiness is not something outside of us; it consists in the practice of the virtues that bring about a personal transformation. Third, the project of the Kingdom leads us to live in love with others. De Mingo Kaminouchi shows the reader a real model of this in the community we call the church, the “field hospital” for all those in need of hope. This book is accessibly written for readers not already well-versed in Christian ethics.

Alberto de Mingo Kaminouchi, PhD, is a priest of the Congregation of Most Holy Redeemer and serves as professor of New Testament ethics at the Alphonsian Academy in Rome and at Saint Louis University (Madrid campus). He was born in Hiroshima, Japan, in 1964, of a Japanese mother and a Spanish father. A Redemptorist missionary, he studied theology at the Pontifical University of Salamanca. He was ordained to the priesthood in 1993. He received a license in Sacred Scripture at the Pontifical Biblical Institute in Rome and a doctorate in biblical theology at the Jesuit School of Theology at Berkeley, California. His books include 'But It Is Not So Among You': Echoes of Power in Mark 10:32-45 (Bloomsbury, 2003), Símbolos de Salvación (Sígueme, 2007), and La Biblia de principio a fin (Sígueme, 2019).