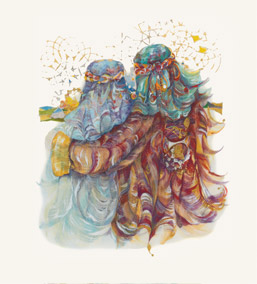 Bereft of her husband and two sons in a foreign country, the Jewish Naomi, mother-in-law to Ruth, decides to return to Bethlehem during a time of famine. Ruth, a Moabite, remains loyal to Naomi despite their different ethnicities, and these verses express the depth of love and fidelity Ruth has for Naomi. This loyalty is rewarded in history when the Moabite Ruth becomes the grandmother of the Jewish King David.

A feeling of mutual love and support is suggested by the inward leaning posture of the two women as they look into the distance.