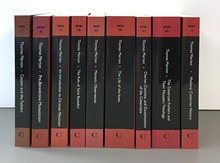 As master of novices for ten years (1955-1965) at the Cistercian Abbey of Our Lady of Gethsemani in Kentucky, Thomas Merton was responsible for the spiritual formation of young men preparing for monastic profession. These conferences form an essential part of the overall picture of Cistercian monastic life that Merton provided as part of his project of "initiation into the monastic tradition" that is evident in the broad variety of courses that he put together and taught over the period of his mastership.

The texts of these conferences represent the longest and most systematically organized of any of numerous series of conferences that Merton presented during the decade of his mastership. They may be the most directly pastoral work Merton ever wrote.

Patrick F. O'Connell is professor of English and theology at Gannon University in Erie, Pennsylvania. A founding member and former president of the International Thomas Merton Society, he edits The Merton Seasonal and he is coauthor of The Thomas Merton Encyclopedia.