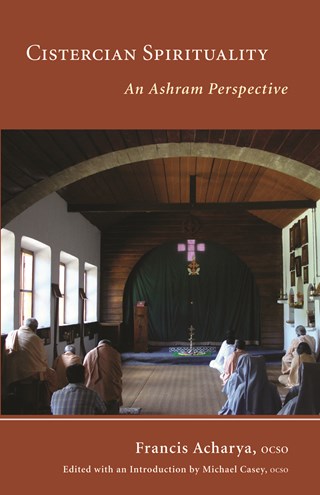 Cistercian Spirituality: An Ashram Perspective is a spiritual directory written by Fr. Francis Acharya for the monastic community that he founded at Kurisumala (Kerala, India). As the editor, Fr. Michael Casey, relates in the introduction:
"This book is offered to a wider world in the hope that it will serve as a means of making and deepening contact with the spirit of the Cistercian tradition not so much as it is written but as it has been lived for over six decades by a deeply spiritual man. To those who know of Kurisumala Ashram or who have read the biography of Fr. Francis, it will provide a gateway to an understanding of the interior life of this remarkable monk. In particular, his description of the stages of the experience of prayer will certainly be helpful to many who, like him, are lifelong seekers of the unseen God."

Francis Acharya, OCSO, left the Belgian monastery of Scourmont in 1955, after twenty years as a Trappist, to live his monastic life in India. His experiences put him in contact with such other pioneering spirits as Henri Le Saux (Abishiktananda), Jules Monchanin (In Quest of the Absolute), and Bede Griffiths (Return to the Centre, The Golden String), and led to an uncommonly successful inculturation of Christian monasticism within Indian culture and spirituality at Kurisumala, where he served as Acharya, teacher, until his death in 2001. His biography, Kurisumala: Francis Mahieu Acharya, A Pioneer of Christian Monasticism in India, is also published by Cistercian Publications.