Memories and Reflections of the Father Abbot of La Trappe 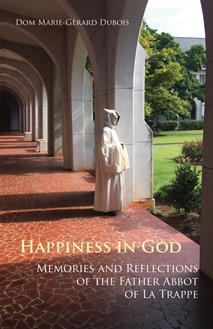 This is a rich collection of memories and reflections from the long-time abbot of La Trappe, Dom Marie-Gérard Dubois, OCSO. Starting with his entry into monastic life, he walks the reader through the dramatic changes in the Strict Observance of the Cistercian Order, including its liturgical reform and developments in the role of lay brothers. Dom Dubois also shares stories about the diverse group of men who entered the Order at that time, including WWII veterans, Holocaust survivors, and members of the French literary elite, and why they decided to become monks. His stories offer a fascinating inside view into twentieth-century Cistercian life.

Dom Marie-Gérard Dubois was born in Lille, France, in 1929 in a family of seven children. In 1947 he entered the Trappist Monastery of Mont-des-Cats, where he became master of novices and then prior. After a short stay as Superior ad Nutum at Cîteaux, Dubois was elected abbot of the Monastery of La Grande Trappe in Soligny, France. During his twenty-five years as abbot he presided over many commissions responsible for implementing the reforms of Vatican Council II in the Cistercian Order. Dom Dubois also presided for thirty years over the French-speaking Commission on Liturgy. He is the author of two books: Le Bonheur en Dieu (Paris: Robert Laffont, 1995) and La Joie en Dieu (Paris: Presses de la Renaissance, 2010). In 2011, Dom Dubois returned to the Lord.

Georges A. Hoffmann is an attorney and a lay Cistercian at the Monastery of the Holy Spirit, Conyers, Georgia.

Jean Truax has a PhD in medieval history; she is an independent scholar and author of Ralph d'Escures, William of Corbeil and Theobald of Bec: Heirs of Anselm and Ancestors of Becket, and Aelred the Peacemaker: The Public Life of a Cistercian Abbot.

"If you ever wondered what life is like in a monastery this is the book for you. Here is a man who lived the monastic life for sixty-four years in which he was abbot twenty-six of those years. Entering the monastery in 1947 he knew the `old' intimately. He embraced Vatican II with open arms and was a leader not only in his own community as Abbot but also on the international scene at our General Chapters. He had the ability to take complex questions and break them down to their essentials. Abbot Gerard lived through some of the most important times of monastic and church history and he lived it with grace and integrity. If he lived during the era of the Desert Fathers, he would have been considered an elder whose words would have been passed on from generation to generation."
Fr. Brendan Freeman, New Melleray Abbey, Iowa

"A deeply engaging and delightfully personalized glimpse into genuine monastic life and experience, including his own meaningful path to La Trappe. Much more than a memoir, Dubois's book whets our appetite to taste and see the conversatio morum of Trappist community, so personally and profoundly spread before us as though at table with the brothers. The English translation captures the narrative and insight of Dubois beautifully."
F. Tyler Sergent, Associate Professor of History and General Studies. Berea College, Kentucky
“This book is a treasure close at hand to enrich every one of us, and many thanks to the two translators who have presented such a readable text to the English-speaking world."
Cistercian Studies Quarterly

“The fifteen chapters are not only spiritual reflections on topics of interest to monastics, but a commentary on the turbulent times in Catholicism leading up to and following Vatican II. The insightful and pastoral words of the abbot provide a wisdom not limited to the nostalgic past, but a path through the issues facing a contemporary Church and secular society.”
Catholic Library World