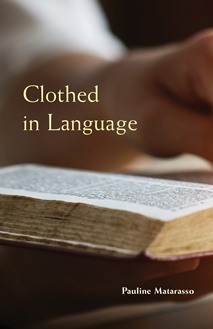 At the heart of Clothed in Language lies a journal, but the writing, while personal, has been given a thematic structure. Seeing language as a vital medium through which the divine is made present to us, scholar and poet Pauline Matarasso explores the ways in which this God-given language, with its overcoat of metaphor and undertow of rhythm, serves to reflect the truth and, on occasion, mask it. This book also includes an essay that looks at certain features common to myth, fairy tale, lore, and Scripture.

Pauline Matarasso is a scholar, translator, and poet with a particular interest in medieval history and literature focused on the Benedictine tradition, though her subjects are wide-ranging and embrace the French prose poet Christian Bobin and the modernist writer Sylvia Townsend Warner. She has spent most of her life in rural settings in England and France, much of it on working farms. She is an oblate of Howton Grove Priory, near Hereford. Among other books she has written and edited, she is the translator and editor of The Cistercian World: Monastic Writings of the Twelfth Century (Penguin, 1993) and translator of John of Forde's The Life of Wulfric of Haselbury, Anchorite (CF 79; Cistercian Publications, 2011).

"With Clothed in Language Pauline Matarasso has written a modern Wisdom book. If much of the biblical Wisdom literature teaches a person how to act, Matarasso offers numinous insights into how to be. Just as importantly, she pushes aside the iron curtain of the Enlightenment and modern Scientism, with their excessive emphasis on rationalism, in order to show us how to learn—or relearn—and use theological imagination. Many of her brief reflections remind me of the apophthegmata, the sayings of the early Christian monks, the abbas and ammas of the desert. Matarasso pushes beyond genre; Clothed in Language is part journal, part linguistic and spiritual autobiography. It is, thus, very fitting to have this volume as part of Cistercian Publications' Monastic Wisdom Series. This book will last. It is a good book for lectio—whether in refectory, office, school, or the quiet place Jesus tells us to go to when we pray.�
Tim Vivian, Professor Emeritus of Religious Studies, California State University, Bakersfield

"It takes a contemplative soul filtered through a mind at once scholarly and poetic to render complex insight with such clarity and beauty. This book offers substantial nourishment, manna in the wilderness."
Erik Varden, Mount Saint Bernard Abbey

"Wise, insightful, provocative, mystical, potentially transformative. Pauline Matarasso's meditative, poetic prose immerses the reader in the mysteries of God's manifestation through the Word, inviting the reader to pay closer attention to the relationship between language and the experience of the divine."
Elizabeth Thompson, Associate Professor of English, Ohio University