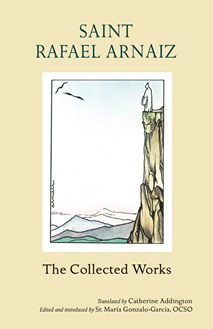 Saint Rafael Arnaiz was born in Burgos, Spain, on April 9, 1911. When he was twenty-one years old, he left behind the comforts of his wealthy family and an unfinished degree in architecture to join the Trappist-Cistercian abbey of San Isidro de Dueñas. A sudden onset of diabetes and the beginning of the Spanish Civil War (1936–1939) turned his monastic journey into an unusual one.

In these unfavorable circumstances and despite the shortness of his life (he died soon after his twenty-seventh birthday), Rafael developed a solid spirituality, which in its simplicity is a straight path to holiness. He has been compared to mystics like Teresa of Ávila and John of the Cross, whose writings inspired him, and his theology of the cross, born from his prayer, places him in continuity with the best of the monastic tradition. In his letters and journals, compiled in this volume, his heart speaks of the joys and struggles of striving to live for God alone.

Catherine Addington, PhD, is a translator and scholar of Catholic writing in the Spanish-speaking world. She earned her doctorate in Spanish literature and translation from the University of Virginia in 2021.

Sr. María Gonzalo-García, OCSO, is the novice director at the Trappist-Cistercian monastery of Our Lady of the Angels (Crozet, Virginia). She is originally from Madrid, Spain, where she completed degrees in social work and theology. She has benefited from Saint Rafael Arnaiz´s spiritual message since the beginning of her monastic journey and hopes to help spread this blessing to others through the English edition of his works.

"There are so many holy heroes waiting for us to stumble upon them, waiting with words that will resonate in our souls and lead us to a closer spiritual union with God. Saint Rafael Arnaiz is a wonderful example of this and through her translation of his collected works, Catherine Addington has made it so for both us and Saint Rafael the wait is over. I have been blessed to get to know this wonderful saint and I smile knowing that countless others will now as well."
Tommy Tighe, author of Saint Dymphna's Playbook

"At last, an accessible English translation of the works of St. Rafael Arnaiz that captures both the appeal and the depth of his life and spirituality! Helpfully and insightfully introduced by Sr. María Gonzalo-García, Addington’s fine translation opens the riches of St. Rafael’s writings to new readers who will certainly benefit from his simple zeal and the profound wisdom he learned from the Cross. Pick up this book, and get ready to be enriched, inspired, and challenged by what you read!"
Mark O’Keefe, OSB, Saint Meinrad Seminary and School of Theology

"St. Rafael is a brother to St. Thérèse of Lisieux, living a small, hidden life that was burning with love for God. I will turn to his writings for strength in my own spiritual life, and I'll read excerpts to my children, so that they can see what it means to turn every crumb and corner of our lives over to God, all for love."
Leah Libresco Sargeant, author of Building the Benedict Option