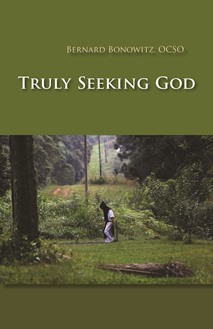 "Truly seeking God" is the one requirement Saint Benedict establishes for the admission of a candidate to the monastery. Once inside, that is exactly what he or she will be doing. In the first part of the book, "From the Rising of the Sun to its Setting," Bernard Bonowitz recounts the ways in which the monk actively seeks God in all the practices and places of the monastic life-in silence and liturgical prayer, work and leisure, solitude and community, spiritual direction and fraternal friendship, the encounter with nature and the encounter with the unsuspected recesses of his or her own heart.

Grace is ever at work through the ongoing fidelity of a monk or nun to the monastic vocation. In the second half of the book, "The Making of a Monk," Bonowitz describes the gradual transformation that grace effects, transforming the innocently self-centered novice into the young solemnly professed, content to carry the weight of responsibility within the community, and finally into the beautiful elder, joyfully focused on God and neighbor and filled with desire for eternal life.

Bernard Bonowitz, OCSO, was born in 1949 into a Jewish family in New York City. In 1968, during his studies of classics at Columbia College, he was received into the Roman Catholic Church. He entered the Society of Jesus in 1973 and was ordained a priest in 1979. In 1982, he transferred to the Order of Cistercians of the Strict Observance (Trappists) at Saint Joseph's Abbey in Spencer, Massachusetts. There he served as novice master from 1986 to 1996. That year he was elected prior of the Trappist monastery of Our Lady of Novo Mundo in Brazil and became its first abbot in 2008.

Bonowitz has published books and articles in English and Portuguese on monastic spirituality. His most recent book in English is Saint Bernard's Three-Course Banquet (Cistercian Publications, 2013).

"Dom Bernardo has the rare gift for distilling decades of experience in formation work into real gems of wisdom and insight, at once deeply contemplative and eminently practical. This book is a precious gift to those seeking God with St. Benedict as their guide."
Gerard D'Souza, Abbey of Genesee


"How does the Christian reach those lofty summits of love to which St. Benedict directs us in his Rule? In this book we listen in to the guidance Abbot Bernard Bonowitz has given his own novices. He offers sound, realistic, and compassionate advice of a spiritual father delivered with love and a touch of humor. He never takes his eye off the goal, but outlining the essentials of monastic spirituality, gently leads every novice-Christian out of self, towards others and into communion with God. This is a rich handbook spiritual growth."
Father Brendan Thomas, Belmont Abbey, UK
"Bonowitz's book, written in a very agreeable style and with much humor, will stimulate a desire in young people to embrace the monastic life. It shows the way that a monk's experience develops over the course of a lifetime, with both its struggles and its joys. Reading it, many will discover their thirst for God, as well as their yearning to find their true self and the way to genuine freedom and life. Not only religious men and women, but lay Christians will also find new impetus to live out their vocation.

"As a Benedictine nun who has profited from the works of Cistercian authors, I would say, `Take up and read!'"


"Although the author intends this book for anyone provided only that he or she is committed to ‘truly seek God’ (Introduction), and it is a rather slender volume of only 150 pages, it is not one that should be skimmed over lightly. The fruit of lived experience, each chapter probes deeply and merits careful reading and reflection."
Cistercian Studies Quarterly


"This is a fresh, modern book on personal spirituality. So many of us are taken up with the distractions of our work, our phones, and our own inner chatter, that it is hard to find a path back to ourselves. Bonowitz shows how aspects of monastic life can help. He begins quite simply with the power of silence and sustaining solitude. From this base, one can develop other practices (meditating on a word, prayer, the focus that comes from cooking and communal work) that can still the mind and open the heart to a spirituality of deeper self-understanding."
Sherry Turkle, MIT professor and author of Alone Together: Why We Expect More from Technology and Less from Each Other and Reclaiming Conversation: The Power of Talk in a Digital Age