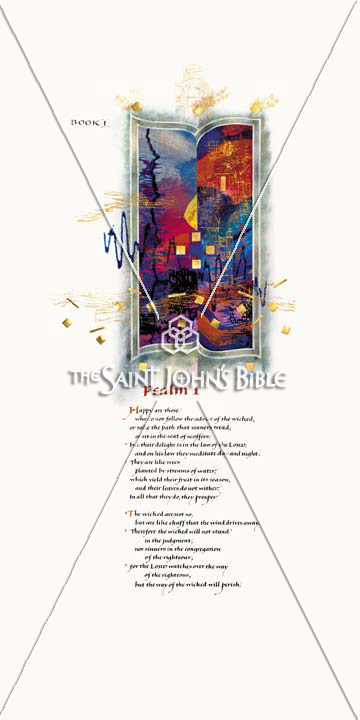 Instead of illuminations like those seen in Gospels and Acts and Pentateuch, Mr. Jackson did special treatments, which hint at the ways in which we might see Psalms if they are sung or read poetically.

He has taken recordings of Saint John’s monks singing Gregorian Chant, Native American sacred song, a Jewish men’s chorus singing Psalms, a Buddhist sacred song, an Islamic call to prayer and a Taoist sacred song and made digital voice print stamps from their visual renderings as they are played through his computer.

The digital voice prints of the Saint John’s monks are seen on every page moving horizontally across the Psalms in gold. The voice prints of other traditions can be seen moving vertically in each of the special treatments. Many traditions praise God through sacred song.