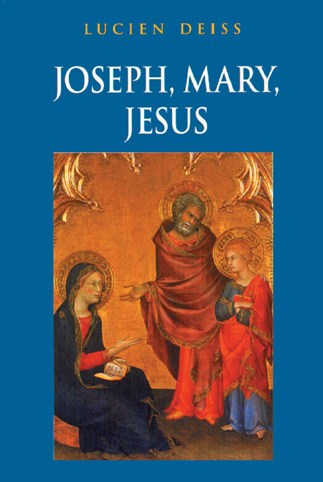 Father Deiss helps us discover the environment of light—Joseph and Mary's tenderness—in which Jesus' humanity developed. Today, we refer to the Holy Family as "Jesus, Mary, and Joseph." In Nazareth, they said, "Joseph, Mary, and Jesus," or "Joseph, Mary, and child." This work reflects on the child Jesus, stressing the influence that Joseph and Mary had on Jesus' childhood at the human level both intellectually and spiritually.

Mindful that post-paschal Christological formulas God, Savior, Messiah, Lord, King, High Priest often run the risk of erasing Jesus' humanity, Joseph, Mary, Jesus, focuses on Jesus' childhood years, highlights his humanity, and presents him to us "familiarly" as a child. It concentrates on the "sources" of Jesus' formation, the rich tradition of the people of Israel, the family practices of Joseph and Mary, and finally on what Jesus discovered on his own in his relation with God.

Mary is presented here in her relationship to the child Jesus and in her role as initiator of Jesus' piety. The themes of her Magnificat are also developed in Jesus' preaching. Joseph, nearly forgotten in salvation history, appears for what he was in the tradition of the time, the head of the Holy Family and the one responsible for the formation—including the religious formation—of his child.

Throughout this work, Fr. Deiss' aim remains the same, to bestow on readers an understanding of Joseph and Mary's profound love - a love whose single focus was for their child, Jesus.

Lucien Deiss, CSSp, for ten years a professor of theology and Scripture at the Grand Scholasticat de Chevilly-Larue, is a pioneer of the biblical and liturgical renewal. He worked for the reform brought about by Vatican II and participated in the ecumenical translation of the Bible. He is the author of numerous books, including Celebration of the Word; Springtime of the Liturgy; and The Mass, published by The Liturgical Press. He has composed many liturgical songs, some of which have been translated into the principal world languages, including Chinese.

I have been reading this man since my first years in college. This book is one that goes on my secret and special shelf reserved for volumes which both deserve and get more time and attention.
National Catholic Reporter