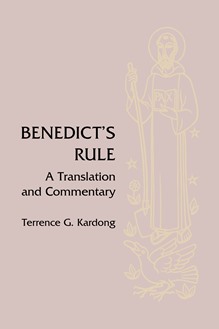 The author's concise and inclusive summary of the vast scholarship of recent years on the Rule will be an invaluable resource for monastic leaders, formation personnel, professors who utilize RB in their courses on spiritual classics and all students of monastic history and spirituality. Terrence provides his readers with a history of interpretation of significant themes in the chapters; the intuitive perceptions of patristic exegesis which undergirds the spirituality of words, motifs, whole chapters; explanations of literary patterns, grammatical anomolies and rhetorical devices through which the rich tones and rhythms of RB are expressed; and penetrating insights into the various approaches of modern scholars to the chapters of the Rule.
Mary Forman, O.S.B.


. . . stands as a monument to the Rule's richness and depth, the product of the authors decades of research, publication, and, perhaps most important of all, living out this Rule as a reliable compass for journeying with God.
Ashland Theological Journal