Prayers of the Eucharist 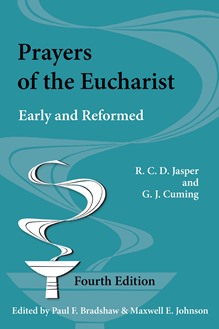 This classic work, previously edited by Ronald Jasper and Geoffrey Cuming, has been a staple source in teaching liturgy to generations of students in colleges, seminaries, and universities. It has now been comprehensively revised for future generations of liturgical scholars.

Maxwell E. Johnson is professor of liturgy at the University of Notre Dame and a pastor in the Evangelical Lutheran Church in America. The author or editor of twenty-five books and of more than ninety articles and essays, he is also a past president of the North American Academy of Liturgy, serves as an editorial consultant for Worship, and is a member of the Scientific Advisory Board for Ecclesia Orans.

Bradshaw and Johnson are the co-authors of The Eucharistic Liturgies: Their Evolution and Interpretation; The Origins of Feasts, Fasts, and Seasons in Early Christianity (both from Liturgical Press); and, with L. Edward Phillips, The Apostolic Tradition: A Commentary, Hermeneia (Fortress Press).

"For decades, Jasper and Cuming's Prayers of the Eucharist has given a wide audience access to the treasures of liturgical tradition. By integrating recently discovered texts, rearranging the material, and thoroughly updating introductions and commentary, Paul Bradshaw and Maxwell Johnson ensure that this standard work remains a reliable guide not only to the sources, but also to current scholarship."
Harald Buchinger University of Regensburg, Germany

"Bradshaw and Johnson have produced an edition of the classic Prayers of the Eucharist: Early and Reformed that every contemporary textual scholar must have. Coming nearly thirty years after the last edition, this new revision reflects the substantial amount of critical work that has been completed since then. The restructuring of the work—placing the prayers in textual `families'—allows the scholar to see more clearly the relationships between and within various eucharistic prayer traditions. In updating this text, Bradshaw and Johnson have drawn not only on their own extensive research in this area but have also mined the depth of other recent scholarship to demonstrate the complexity of current debates (including the work of McGowan, Rouwhorst, Stewart-Sykes, Gelston, Spinks, and Winkler, to name just a few). The revisions in both commentary and text reflect the multiplicity of forms in eucharistic praying in the early church and invite the student of liturgy to enter more deeply into the texts themselves."
Rev. R. Gabriel Pivarnik, OP, Department of Theology, Providence College