The Process of Admission to Ordained Ministry: A Comparative Study Volume I 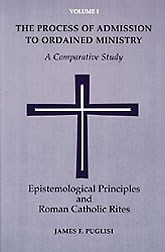 Ordination is a complex process that links ministry, local church, confession of faith, and communion. This process is communitarian, liturgical and juridical, and through these traits, sacramental. Father Puglisi explores the notion that Christian (both Catholic and Protestant) ordination cannot be reduced to a simple rite of installation or to the acceptance of a charge, but is an ecclesial process whereby a Christian receives a charism for the edification of the Church.

Father Puglisi analyzes the liturgical and canonical institutions in three periods (the ancient and Medieval period, the period of the Reformation, and the contemporary period) to recover an understanding of the complex structure of ordination and the implicit connection between ordained ministry and the structuring of the Church. Volume I explores the meaning of the episcopal and presbyteral ministry according to the ordination rituals from the early Church (the apostolic tradition) until the eighth century, and the resulting structuring of the Church. Chapters study documents from that time period and their theological reflection.

Separate volumes will address each of the three periods. A fourth volume will offer an English translation of the liturgical rites examined in the first three volumes. It will also include an extensive bibliography of sources and secondary literature, a comparison of the structure of the two liturgical offices of ordination/installation of a bishop and of a presbyter, of the prayers of ordination or installation, of the examination of the elect and of the use of biblical readings in each of the liturgical rites.

James F. Puglisi, S.A., is a member of the Franciscan Friars of the Atonement in Rome, Italy. He teaches ecumenical theology and ecclesiology at the Pontifical University of St. Thomas Aquinas (Angelicum) and holds the chair of ecumenics at the Pontifical Athenaeum "Antonianum" (Rome) and teaches among the ecumenical faculty of St. Bernardino (Venice.) He directs the Atonement Friar's ecumenical center, the Centro Pro Unione in Rome, Italy, and is the author of several books and articles. He holds a BA in sociology and a MA/STL in liturgical theology from the Catholic University of America, a DEA and a PhD in the history of religions and religious anthropology from the Universit&eacut de Paris IVSorbonne (Paris), a STD in systematic theology from the Institut catholique de Paris, and a certificate of ecumenical studies from Boston University.

The book provides a very extensive set of reference sources and studies. It shows how questions raised anew by the ecumenical movement can provide a lens that gives the sources a new vitality and utility for the churches and their pastoral ministry. Finally, it contributes to common history and theological reflection on a topic that has been divisive in ecumenical conversation.
Jeffrey Gros, F.S.C., Journal of Ecumenical Studies