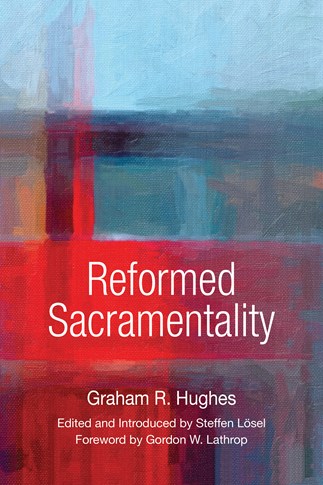 In Reformed Sacramentality, the late Graham Hughes discusses the role of physicality in worship. He contends that to counter the Reformed tradition's vulnerability to a cultural colonization by secular modernity, Reformed theology needs to amplify its appreciation for God's omnipresence in creation with a re-appropriation of the condensed symbols of faith. Hughes's argument builds on a historical analysis of the Reformed tradition's rejection of material sacramentality and its ecclesial and cultural consequences. From a late modern vantage point, Hughes advocates for a rediscovery of material sacramentality both as a lever against modern solipsism and as an iconic reminder of God's radical otherness.

Graham Hughes received a bachelor of arts and a master of arts in classical Greek at the University of Otago and a doctorate in New Testament studies from Cambridge University. From 1977 to 2003, he taught New Testament studies and, later, liturgical studies at United Theological College in Sydney, Australia. In 2003, Hughes published his liturgical magnum opus, Worship as Meaning: A Liturgical Theology for Late Modernity, with Cambridge University Press. Hughes died on February 16, 2015.

Steffen Lösel is associate professor of systematic theology at Candler School of Theology, Emory University. He received his master of divinity from the Evangelical Lutheran Church in Bavaria and his doctorate in theology from the University of Tübingen. His book, Kreuzwege: Ein ökumenisches Gespräch mit Hans Urs von Balthasar, appeared in 2001 with Ferdinand Schöningh.

"I highly recommend this book, especially to those who are confused about what is happening in Christian sacramental theology today. Hughes's contribution, first in Worship as Meaning and now in Reformed Sacramentality, helps us to rethink how meaning is transacted in worship and sacrament today. Hughes opens up a new way of talking about the sacraments."
Calvin Theological Journal


"This posthumous study is a long-awaited consideration of an issue which concerns all thoughtful practitioners in the Reformed Tradition: it explores the origins of Reform's bifurcation of spirit and form, its long favouring of the cognitive over the physical (and indeed the affective) mode, of speech over symbol in sermon and sacrament. Hughes constantly reaches out to other Christian traditions as he delineates a new Reformed canonicity. It is especially pertinent to his own church, the Uniting Church in Australia (Reformed/Methodist), for a reclamation of the materiality of faith itself, and therefore of both word and sacrament, is a key to the recovery of rich and enduring forms of worship."
The Rev. Dr Robert Gribben, Professor Emeritus of Worship and Mission, Uniting Church Faculty of Theology, Melbourne, Australia


"No one thought more clearly or creatively about the place of worship in a postmodern environment than did Graham Hughes. Firmly grounded in the Reformed theological tradition, Hughes nonetheless vigorously engaged a wide range of ecumenical and philosophical thought. Now, through the generous work of William Emilsen and Steffen Lösel, we gratefully have the much-anticipated book Hughes was working on when he died. Reformed Sacramentality is highly original, profoundly theological, and richly practical. Hughes manages to remain true to the Reformed sacramental tradition, while at the same time pointing in breathtaking new directions."
Thomas G. Long, Bandy Professor Emeritus of Preaching, Candler School of Theology, Emory University
"This very important posthumous work lays out a major part of the research and career path of an outstanding liturgical scholar in the Reformed tradition dealing with the ever elusive issues within that tradition. This is a "must read" for anyone reflecting on the ever burgeoning field of making sense of "sacramentality" in a post modern world."
Ecclesia Orans


"This volume reintroduces Hughes's critical and constructive achievement in his book Worship and Meaning and extends it by presenting his argument for a distinctively Reformed sacramentality. A welcome addition to Reformed and ecumenical reflection!"
Amy Plantinga Pauw, Henry P. Mobley, Jr., Professor of Doctrinal Theology, Louisville Presbyterian Seminary


"This `final word' from Australian liturgical theologian Graham Hughes is a distinctive and rich contribution to contemporary discussions about sacramentality. Hughes challenges the ways in which a Reformed disseminated sacramentality—where awareness of God and the sacred are located in everyday experience—has shaped the sacramental understanding of many Protestant churches and placed them in danger of `secular colonization by modernity.' He takes on what he calls the `uncertain place' of materiality in the Reformed tradition, arguing that material physical forms—sacramental things—have a necessary place in the church's life and practice. In doing so, he ably demonstrates the need to balance disseminated sacramentality with a `condensed' sacramentality, through which our awareness of the sacred is found in specific trusted material actions, our physicality is acknowledged and engaged in Christian worship, and our encounter with G d is given physical form. Readers new to Hughes will also find Steffen Lösel's introductory essay a helpful and clear survey of Hughes's work and thought, placing this book in context with Hughes's major contribution, Worship as Meaning."
E. Byron Anderson, Styberg Professor of Worship, Garrett-Evangelical Theological Seminary, Evanston, IL


"This book is a collection of disparate thoughts and writings collected together as the first attempt to initiate a conversation on the place of sacramentalism within the Reformed tradition of the Catholic faith. The book puts before us a strong thesis about the neglect of sacramentalism in Reformed worship and might well catch the eye of both church theologians and congregants as part of a wider conversation about the key elements that might be missing from our church life and witness in our Western post/modern and now nonhuman cultural movement."
Anaphora


"The Reformed tradition is in need of sacramental reform! This timely work comes to light in an era in which brain research makes clear that human knowing arises from sensory engagement with the material and social environment. This bold and provocative work by Hughes calls for a fundamental reconsideration of the role of embodiment in Reformed approaches to baptism and the Lord's Supper. Taking cues from a robust Christology that highlights Christ as the icon of God, Hughes provides a fresh way of thinking about the fusion of materiality and the sacred in the sacraments. Lösel's introductory essay provides illumination and context for the thought-provoking challenges offered here."
Rev. Dr. Gordon S. Mikoski, Princeton Theological Seminary


"Reformed Sacramentality is a splendid resource that opens up fresh ways for theologians and clergy to understand sacramentality. Its richest offering is help for thinking about the relationship between holy things and ordinary things: that is, divine presence in rites and sacraments, and divine presence everywhere and at all times. This book is a superlative scholar's final gift to our own reflections on sacraments, whether located in the Reformed tradition or not."
Anglican Theological Review


"The fruit of a lifetime of prayer and study, driven by a pedagogical desire to help his students resist the corrosive effects of modernity. Hughes well knows that we won't think our way into freedom from an overly cognitive spirituality without robust liturgical practices which transcend (and even upend) entrenched cognitive habits."
Worship Journal


"An important work that deserves a careful reading by pastors, church leaders, and seminarians."
Interpretation