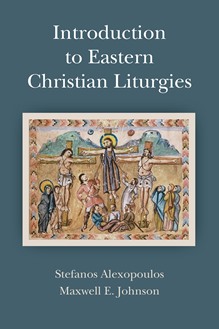 In Introduction to Eastern Christian Liturgies, renowned liturgical scholars Stefanos Alexopoulos and Maxwell E. Johnson fulfill the need for a new, comprehensive, and straightforward survey of the liturgical life of the Eastern Christian Churches within the seven distinct liturgical Eastern rites still in existence today: Armenian, Byzantine, Coptic, Ethiopic, East Syrian, West Syrian, and Maronite. This topical overview covers baptism, chrismation, Eucharist, reconciliation, anointing, marriage, holy orders, burial, Liturgy of the Hours, the liturgical year, liturgical ethos and spirituality, and offers a brief yet comprehensive bibliography for further study. This book will be of special interest to masters-level students in liturgy and theology, pastoral ministers seeking an introduction to the liturgies of the Christian East, and all who seek to increase their knowledge of the liturgical riches of the Christian East.

Maxwell E. Johnson is professor of liturgy at the University of Notre Dame and a presbyter in the Evangelical Lutheran Church in America. His numerous publications are on the origins and development of early Christian liturgy, contemporary rites, and current ecumenical and theological questions in both East and West. He is the author and/or editor of more than twenty books and over one hundred essays and articles. He is also a former president of the North American Academy of Liturgy, a member of the Society of Oriental Liturgy, a member of Societas Liturgica, and a member of the scientific advisory board for the journal Ecclesia Orans.

"The diversity of Eastern Christian Rites is not only a rich inheritance from the past; it is also of increasing importance in a globalized world – and at the same time acutely endangered in some of its pristine homelands. In this situation, this comprehensive, clear and accessible introduction is on the one hand of interest for scholars and students seeking reliable information and up-to-date bibliographies; on the other hand, it opens up the treasures of theology and spirituality transmitted in the liturgical life of the Eastern Christian Churches."
Harald Buchinger, University of Regensburg, Germany

"Here is a new prowess and a great service rendered to Westerners interested in developing a genuine understanding of the Christian communities belonging to the churches of the East. Through state-of-the-art scholarship, the Rites of the different churches (holy mysteries, liturgical year and divine office, funerals) are studied through a systematic comparative liturgy approach in a dynamic way which accounts for the historical development of each tradition placed in immediate parallel with all the others, even reflecting present-day questioning. The Introduction presents the domain, the methodological approaches, the mind of Eastern Christianity, while the ethos and spirituality of the Oriental Churches conclude a most informative volume."
Fr. Emmanuel Fritsch, CSSp, is pastor of the Byzantine-rite Catholic parish of Saint Irenaeus of Lyons, Lyons (France)

"This substantial volume provides the ideal reference work for Western Christians wanting to gain more than a superficial acquaintance with the liturgical practices of the Eastern Churches. It is detailed and comprehensive, covering much more than the Eucharist or the rites of the Orthodox Church. It incorporates the latest scholarship in tracing the history of the various traditions. And it intersperses tables and quotations of texts liberally throughout, to make the complexity much more easily intelligible."
Paul F. Bradshaw, Emeritus Professor of Liturgy, University of Notre Dame

"This excellent work will, I hope, help open out new directions within the field of liturgical study and act as a catalyst for further exploration and dialogue. I can only express delight and gratitude that this book exists."
The Tablet

"Where this book shines is in the number of translated texts of prayers and commentaries provided as well in enormously helpful charts that help the reader to trace the development of various rites. Readers will be impressed by the richness and beauty of the euchology of the Christian East."
Theological Studies

"This book is an excellent introduction to the rich liturgical traditions of Eastern Christianity, too little known to Western Christians."
Church Times

"At last, Eastern liturgies have a true academic manual, necessary for students as well as teachers. We have waited half a century, but the expectation has been amply rewarded."
Stefano Parenti, University of Regensburg, Germany

“This book could not be more relevant or necessary. Introduction to Eastern Christian Liturgies comes at a time when many foundational Christian traditions are threatened with extinction in the very lands of their origin. It deserves deep study and serious meditation.”
Joseph P. Amar, Professor of Syriac Christianity, University of Notre Dame

"Those who teach liturgy are well aware that hitherto there has been no single, up-to-date, and comprehensive study that covers both the history and the present sitz im leben of the classical Eastern liturgical rites. This timely volume by Stefanos Alexopoulos and Maxwell Johnson admirably fills the lacuna."
Bryan D. Spinks, Bishop F. Percy Goddard Professor of Liturgical Studies and Pastoral Theology, Yale Institute of Sacred Music and Yale Divinity School

"This book is a cause for celebration! Study of Eastern Christian liturgy has long been hampered by isolation of the scholarship into separate fields, often by linguistic category, prohibiting full appreciation of the rich, complex, and fertile intersections, diversifications, and developments that have enabled Eastern liturgies to flourish across the centuries. Instead, here in one concise, eloquently crafted volume, is the presentation of eastern Christian liturgies in their full panoply of splendor. A monumental achievement, opening new frontiers for study and knowledge."
Susan Ashbrook Harvey, Willard Prescott and Annie McClelland Smith Professor of Religion and History, Brown University

"We ought to continue to pray for the restoration of table fellowship among Orthodox and Catholic Christians, because in the figures of our martyrs we glimpse the reality that we have been called by the same Eucharistic Lord. For all of the rich descriptions of Eastern Christian rites that Alexopoulos and Johnson provide, this reminder from the book is the one point that has lingered with me the longest."
Catholic Books Review

"Two eminent scholars and theologically-minded pastors bring together a survey of the latest source-based research and an analysis of contemporary issues for ancient Eastern Christian worship in the modern world. No other introduction combines the broad scope of liturgy--including texts of prayers and hymns, sacramental theology and ritual actions, art and architecture--and their myriad expressions in various Eastern Churches. This book will become the standard reference for anyone interested in the rites of the Christian East, whether scholars specializing in one of its many traditions or curious students and practitioners looking for an accessible introduction to a different ethos and form of spirituality."
Daniel Galadza, Metropolitan Andrey Sheptytsky Institute of Eastern Christian Studies, University of Toronto

"The field of liturgical studies has long needed a manual like this. While the discipline affirms the fundamental importance of studying liturgy comparatively, students often find it difficult to access the Eastern rites. Alexopoulos and Johnson have helped fill a major void with this important introduction to the rich liturgies of the Christian East. It will be an important reference for scholars and students alike."
Gabriel Radle, Assistant Professor of Liturgical Studies, University of Notre Dame