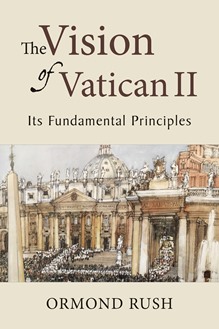 The Vision of Vatican II

This book is unique in the literature about Vatican II. From the manifold issues debated at the council and formulated in its sixteen documents, Ormond Rush proposes that the salient features of "the vision of Vatican II" can be captured in twenty-four principles. He concludes by proposing that these principles can function as criteria for assessing the reception of the conciliar vision over the last five decades and into the future. There is no other book that attempts such a comprehensive synthesis of the council's vision for renewal and reform of the Catholic Church.

Ormond Rush is a priest of the diocese of Townsville, Australia, with a doctorate in theology from the Gregorian University in Rome. He currently lectures at St Paul's Theological College, Australian Catholic University, Brisbane Campus. His publications include Still Interpreting Vatican II: Some Hermeneutical Principles (New York: Paulist Press, 2004) and The Eyes of Faith: The Sense of the Faithful and the Church's Reception of Revelation (Washington, DC: The Catholic University of America Press, 2009).

"In line with Pope Francis, Orm Rush wants church leaders, theologians, and all the faithful to receive and live the whole vision of Vatican II. Rush remains faithful to his conviction that one can use the `theo-logical' focus of Dei Verbum as a lens to interpret passages from other documents, but also grants a certain normativity to other documents of the mature Council (especially Ad Gentes and Gaudium et Spes). I was most impressed by Rush's ability to enrich his analysis of the different principles by combining sometimes unexpected references from different documents (intertextuality), such as using lines from Sacrosanctum Concilium to shed light on Nostra Aetate."
Peter De May, Faculty of Theology and Religious Studies, KU Leuven


"Ormond Rush's The Vision of Vatican II develops an insightful and comprehensive matrix for understanding the council. The principles Rush proposes help readers to see Vatican II as a whole, while his careful attention to the council's history and documents aids exploration of conciliar themes. Rush's extensive scholarship and theological acumen makes The Vision of Vatican II a valuable and significant text for the ongoing interpretation and reception of Vatican II."
Amanda C. Osheim, Endowed Professor of the Breitbach Catholic Thinkers and Leaders Program and Associate Professor of Practical Theology, Loras College, Dubuque, IA


"The Vision of Vatican II opens a new way to communicate the message of the Council, its sixteen documents and their international theological interpretations during the last 50 years. Ormond Rush manages to bring hundreds and hundreds of quotations of the conciliar texts and the theological references into a brilliant and transparent convergence.

"Rush does not pretend a critical evaluation of the documents. Yet the positive presentation of the `vision' guides the critical reader to discover the deficiencies in the actual reception of the Council and the discrepancies between the vision and the actual reality."


“Rush’s book demonstrates that it is not ‘too soon’ to learn a great deal about the council’s meaning in relation to central aspects of its theology and self-understanding.”
Modern Believing


"“Rush’s book is without a doubt one of the most important books on Vatican II published in the last two decades. It draws upon an incredible range of scholarship while offering a synthetic and constructive account of the council.”
Newman Studies Journal


"The Vision of Vatican II expands and caps Ormond Rush's already-significant contribution to conciliar scholarship. In its detail, depth, and its affirmation of the ways in which the council can continue to enrich the church, The Vision of Vatican II is a truly magisterial work. For everyone committed to the thriving of the church's mission in the world, this book will be a wonderful source of hope and encouragement."
Richard Lennan, Boston College School of Theology and Ministry


"Rush engages academic theologians in a deep analysis of the conciliar texts while presenting the complexity of the Vatican council in a way that is also enormously rewarding to less professional readers. This book is recommended to anyone who struggles to understand the meaning of the Second Vatican Council and who is not enlightened by the polarized antagonisms of recent decades. It is a long book, admirably clear in the way it approaches sometimes complex issues, and rewards the reader from its first word to its last."
National Catholic Reporter


"An outstanding theological work about an extraordinary conciliar event. Rush's approach, historical in the broadest sense, breathes life into the documents and shows how dynamic each principle is, and how the principles relate to one another."
Catholic Books Review


"Well over five decades removed from Vatican II it can still be said that most Catholics, including many church leaders, are quite comfortable citing Vatican II while having little substantive comprehension of the council's most important contributions. For that reason, the entire church is in the debt of the Australian theologian Ormond Rush, who offers what is quite simply the most perceptive, accessible yet comprehensive articulation of why Vatican II still matters. His twenty-four principles synthesize the central and still quite compelling contributions of the council to the life of the church today. Moreover, Rush's brilliant articulation of the council's vision also illuminates the remarkable pontificate of Pope Francis who is, in so many ways, the preeminent `Pope of the Council.'"
Richard R. Gaillardetz, Joseph Professor of Catholic Systematic Theology, Boston College


"The book connects so many dots, the connecting of which itself has kept the Church together through so much."
Fr. Bob Schrader


“The Vision of Vatican II is not so much a story that proceeds from beginning to middle to end as it is a score that sets out a series of themes and then returns to them in multiple variations. The movement is circular, not linear. The book’s most important contribution—namely, its historically sensitive intra- and inter-textual reading of the council texts—leads to fresh insights.”
Theological Studies


"This is a highly important work. Ormond Rush models a symphonic and intertextual reading of the documents of the Second Vatican Council, placing them in their historical context, attending to both authors and receivers, and revealing the trajectory of vital insights that invite fresh theological thinking. His application of sound hermeneutical principles carefully drawn from the orientations of the council itself exposes the limits of one-dimensional or facile interpretations of the council's teaching. Especially significant is Rush's contention that the council itself (and hence its interpretation) prioritizes the `theo-logical' over the ecclesiological—encounter with the living God through Christ and the Spirit over its various mediations in the scriptures, the liturgy, and the life of the church. Grounded in the best of recent scholarship, this book will stand for years to come as point of reference for students of the council and its teaching."
Catherine E. Clifford, Professor of Systematic and Historical Theology, Saint Paul University, Ottawa, Canada