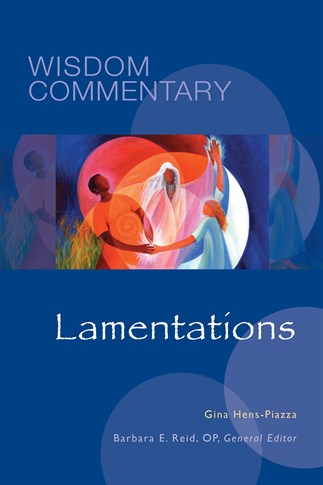 Though the five poems of Lamentations undoubtedly refer to the Babylonian siege and destruction of Jerusalem in 587 BCE, the multiple voices that narrate unspeakable suffering and labor to make sense of the surrounding horror do so at women's expense.

In the opening chapters, a prevailing metaphor of Jerusalem as a woman (Woman Zion) portrays a weeping widow, abandoned and alone, who soon becomes the target of blame for the downfall of the city and its inhabitants. Vague sexual improprieties craft the basis of her sinfulness, seemingly to justify her immense suffering as punishment. The damning effect of such a metaphor finds company in subsequent accounts of women, young girls, and mothers-all victims of the destruction recorded therein. But this feminist interpretation of Lamentations does not stop at merely documenting the case against women; it also demonstrates how such texts can serve as sources of strength by lifting up portraits of courageous resistance amid the rubble of misogynist landscapes.

Gina Hens-Piazza is Joseph S. Alemany Professor of Biblical Studies at the Jesuit School of Theology of Santa Clara University, a school within the Graduate Theological Union in Berkeley, California. She is the author of Of Methods, Monarchs, and Meanings: An Approach to Socio-Rhetorical Exegesis (Macon, GA: Mercer University Press, 1996), New Historicism and Biblical Interpretation in the Guides to Biblical Scholarship series (Minneapolis: Fortress, 2002), Nameless, Blameless and without Shame: The Tale of Two Cannibal Mothers before a King in the Interfaces series (Collegeville, MN: Liturgical Press, 2006), and Abingdon Old Testament Commentaries: 1 and 2 Kings (Nashville: Abingdon, 2008). Hens-Piazza is a frequent lecturer nationally and internationally. She received her PhD and MPhil from Union Theological Seminary, New York, and her MA from Vanderbilt University.

"Alert to the complexity of Lamentations' portrayal of suffering, Hens-Piazza invites dialogue between this book and urgent contemporary voices that resonate with it. This contribution to the Wisdom Commentary series opens for reflection various dimensions of suffering while stressing the gendered experience Lamentations presents. Hens-Piazza boldly takes on the challenges of multiple voices reflecting on issues of gross injustice, alerting us to the ethical complexity of such situations as are presented here and elsewhere in our experience. The various contributions brought to bear here from biblical scholarship, gender theory, and contemporary culture help us hear the diverse and often competing claims of many experiences of suffering. Hens-Piazza's work challenges us to see and possibly slow our tendency to project harm and blame onto others, whether co-creatures or creator."
Barbara Green, OP, Professor of Biblical Studies, Dominican School of Philosophy and Theology, Berkley, CA

"While the book can stand on its own merits and provide important insight into both this particular biblical book and feminist biblical interpretation, any contemporary theological library would do well to invest in the entire series."
Catholic Library World

"The author makes an extremely important suggestion that Lamentations can further women's agency. Women who gather around this text can free Zion's voice from silence, reject the patriarchal theology of a violent God, and create the occasion for solidarity to express their own victimization. This is always, and increasingly, relevant for our time."
Interpretation

"This volume is a work of careful, insightful scholarship that will be of interest to many."
The Bible Today

"Hens-Piazza's work provides an accessible, careful treatment of Lamentations. While it is best suited for those preaching, teaching, or studying Lamentations, it may also fit well into some undergraduate and graduate courses on biblical interpretation, feminist theology, and theodicy."
Horizons