A Brief History of the New Ecclesial Movements 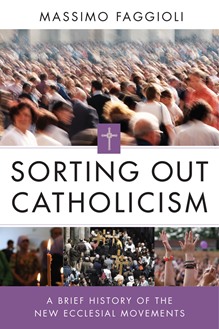 In this expanded and thoroughly updated English edition of the Italian edition (2008), Massimo Faggioli offers us a history and broader context of the so-called ecclesial movements of which Focolare, Community of Sant'Egidio, Neocatechumenal Way, Legionaries of Christ, Communion and Liberation, and Opus Dei are only some of the most recognizable names. Their history goes back to the period following the First Vatican Council, crosses Vatican II, and develops throughout the twentieth century. It is a history that prepares the movements' rise in the last three decades, from John Paul II to Francis. These movements are a complex phenomenon that shapes the Church now more than before, and they play a key role for the future of Catholicism as a global community, in transition from a Eurocentric tradition to a world Church.

Dr. Massimo Faggioli is professor in the department of theology and religious studies at Villanova University (Philadelphia). He has written extensively on modern Church history and on the Second Vatican Council. He is the author of True Reform: Liturgy and Ecclesiology in Sacrosanctum Concilium (2012), and John XXIII: The Medicine of Mercy (2014), both from Liturgical Press.

Listen to the interview with Professor Massimo Faggioli

Massimo Faggioli brings his fresh, creative voice to the much neglected subject of "new ecclesial movements." "Sorting out" movements "intimately intertwined" with "the modern papacy and the contemporary church" requires skills as a theologian and historian, which Faggioli has in abundance. Movements have already transformed Catholicism in Europe and Latin America, and in the future they will either complement or substitute traditional parishes, support or undermine Catholic institutions. Those who wish to understand and share responsibility for the future of Catholicism, in the United States and elsewhere, would do well to consider Faggioli's nuanced assessment of these mostly Euro-centered movements.
David J. O'Brien, College of the Holy Cross (Emeritus)

"Faggioli's book is tremendously helpful, offering not only a guide to the various movements—many of which are relatively unknown beyond European Catholic communities—but also a map of the ways in which various popes have engaged with these communities. An indispensable starting point to understanding the various lay movements within Catholicism, both as they relate to one another and as they relate to the Catholic hierarchy."
Reading Religion

Faggioli offers a highly sophisticated analysis of the new ecclesial movements while telling the story of the Catholic Church over the past one and a half centuries. His international perspective informs his use of methods that are historical, sociological, and theological. This book stands in a category of its own among works on this subject.
Dennis M. Doyle, Professor of Religious Studies, University of Dayton

Massimo Faggioli has become one of the most respected theological interpreters of Vatican II and the battle over its meaning. This new book explores a wider set of issues with a related agenda. How are we to assess the variety of new Catholic movements and their relationship to the legacy of Vatican II? His analysis and findings will undoubtedly shape the future debate.
Bradford Hinze, Fordham University