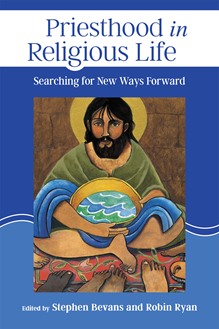 This is the first book in English on priesthood in religious life to be published in twenty years. Its fourteen contributors search for new ways forward in the understanding of the distinct identity and ministry of religious men—committed to community, the prophetic lifestyle of vows or promises, and the particular charisms of their congregations—who have also answered the call to priesthood. Essays in this collection include reflections from a bishop, from the perspective of a lay theologian, from an expert in the social sciences, and on Pope Francis's teachings on priesthood. Included as well are essays that are rooted in particular cultural traditions, in spirituality, and in canon law.

Stephen Bevans is a member of the missionary congregation of the Society of the Divine Word (SVD) and professor of mission and culture, emeritus, at Catholic Theological Union, Chicago. He publishes, teaches, and lectures regularly, both nationally and internationally, about priesthood, religious life, and priesthood in religious life. Author, co-author, editor, and co-editor of seventeen books, he is a member of the World Council of Churches' Commission on World Mission and Evangelism.

Robin Ryan is a Passionist priest who serves as associate professor of systematic theology at Catholic Theological Union. He teaches and writes in the areas of ecclesiology, Christology, and the theology of suffering. He is the author of God and the Mystery of Human Suffering: A Theological Conversation Across the Ages (Paulist Press, 2011) and Jesus and Salvation: Soundings in the Christian Tradition and Contemporary Theology (Liturgical Press, 2015). He also edited and contributed to the book Catholics on Call: Discerning a Life of Service in the Church (Liturgical Press, 2010).

"Catholic laity would benefit from reading this book since many people do not understand the difference between religious and diocesan priests. Bishops, priests, and religious would gain insights and seminarians, particularly in houses of studies for religious communities, now have a resource for courses on the theology of the priesthood that take their vowed life into consideration as well."
Catholic Library World


"True to its subtitle, this book offers a blueprint for `a new way forward.'"
Catholic Press Association


"This book calls religious priests to embrace the tension between profession and ordination in order to re-embrace the mercy at the heart of many of the founders of religious orders. This book highlights the mobility that allows religious to transcend both diocesan boundaries and cultural boundaries in order to forge new ways of discipleship for encountering a world of change revved up by the almost daily innovations of technology. This book is indispensable for anyone interested in the religious priesthood in the twenty-first century, and I cannot recommend it highly enough!"
Garrett Galvin, OFM, Franciscan School of Theology


"When Hollywood occasionally portrays a Catholic priest on film, the specter of Bing Crosby in `Going My Way' still lingers. Usually that priest is a parish priest, living a solitary life in the rectory and worrying about the upkeep of the school. In fact, as recent history has shown, many diocesan bishops and even higher church officials have the same image in mind. This superb volume of essays reminds us that, although there is one priesthood, it has two very different expressions. Drawing on experience, sociological data, and sound theology and history, these well-informed essays illustrate the distinctive—and necessary—contribution that priesthood in a religious context offers to the life of the church. Religious priests represent a diverse, prophetic, and collegial experience of priesthood, rooted in the charisms of their respective communities and flourishing in a wide array of ministries."
Donald Senior, CP, President Emeritus and Chancellor, Catholic Theological Union, Chicago


"The reflections develop against the backdrop of the shift in emphasis from a sacrificial to a more pastoral orientation of priesthood since Vatican II, and the fact that many religious priests are dedicated to pastoral work in parishes."
Verbum SVD


"This book represents a deep and remarkably insightful integration of the past and the future in that it offers a vision of a prophetic and servant model of priesthood rooted in intercultural and international modes of religious life. I believe that this project not only points the way to the future of the religious life and ordained ministry, but also for the universal church and its own mission to `read the signs of the times' and evolve as a truly inculturated prophetic and priestly community in the contemporary world."
John J. Markey, OP, Oblate School of Theology


"Reading this book, I am struck by the fact that the Church itself has shown a new face to the wider world in the person of this Jesuit pope with a Franciscan name, a leader with a spirituality and pastoral theology forged on many of the ministerial frontiers named in the book itself. Religious life has always served a prophetic function in the Church, whether it has been lived out by women or men. The chapters of this book accentuate this prophetic dimension of Christian priesthood, not only as it relates to the priestly identity of individual members of religious orders but as it informs ministerial collaboration among all ordained and lay leaders in the Church."
Christopher Hadley, SJ, Jesuit School of Theology