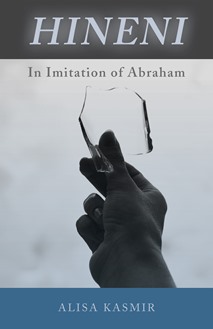 In Imitation of Abraham
Alisa Kasmir

How do you encounter the mystery of the other? This is the central question at the heart of spiritual direction and central to the human quest. Hineni—presence—is not an answer to the mystery but a response to the challenge. At a time when people on the edges of religion increasingly seek out spiritual direction as a way of confronting life's unanswerable questions, hineni indicates a fundamental reality beyond labels. And in an age that seems to suffer from disconnection, hineni indicates a way in.

A helpful resource for anyone interested in spirituality beyond easy answers or (in)convenient labels, Hineni: In Imitation of Abraham is a stark exploration of what it truly means to be present—to yourself, to the one before you, and to the one we call God.

Alisa Kasmir is a native New Yorker who lived in Chicago and London before settling in Rotterdam, The Netherlands. There, often with the help of her Labrador Pippa, she has long practiced spiritual companioning with individuals, groups, and at a senior rehab facility. Alisa holds a degree in spiritual direction from the Titus Brandsma Institute in Nijmegen and bachelor's and master's degrees from Northwestern University. Alisa was a classical singer and is the mother of two nearly grown sons.

"It has been a long time since I have read a book that taps and enhances the best of my own monastic and biblical history and lived experience beyond traditional definitions and borders. I recommend Hineni, together with inquiry into the invitation offered to the reader."
Pegge Erkeneff in Presence


"This profound book shows what is at stake in the intimate relationship and interaction of spiritual directors with those who yearn for human flourishing in uncertain and difficult times, and who seek to discern the ultimate orientation of their spiritual journey. The book calls for the spiritual director to seek simply to be there and to be available (hineni) for the other one in a perceptive, covenantal relationship . . . it depicts this availability to the other as a challenge and even a risk, because it requires complete connection, unconditional commitment to and vulnerability before the other, sometimes at the cost of one's own needs and knowledge—or even at being confronted with one's own helplessness and incapacity for spiritual direction."
Pieter G.R. de Villiers, Professor of New Testament Studies, University of the Free State, South Africa


"In Genesis 22, the fascinating and shocking story of Isaac's sacrifice, Abraham says hineni three times, `here I am': the first time to God, the second time to his son, and the third time again to God. Alisa Kasmir names the willingness that these words express as the fundamental attitude of spiritual directors. By being open-minded and vulnerable, space is created for directors to perceive God's word in the narratives of their directees. Kasmir does not keep a monologue. Six seasoned spiritual directors affirm her argument with their own real-life experiences. Kasmir is expressive and succinct at the same time; she never loses sight of the common thread, hineni. Her story is inspiring and enchanting, pleasant for colleagues and for many others."
Charles Caspers, Titus Brandsma Institute, Nijmegen


"Hineni is a way of seeing, of being, and of relating to the world. `It means to say (in Hebrew) "Here I am for you, with you.''' Taking as point of departure the often puzzling, not to say shocking, midrash of Genesis 22 (Abraham's sacrifice of his son Isaac), and drawing on her rich religious background (Jewish, Christian, Carmelite, Benedictine), Kasmir weaves an inviting lectio divina to elucidate the art of spiritual direction. One will not read Genesis 22 in the same old way again. And one will view spiritual direction with a new sense of presence—to God, and to the companion on the way. The inclusion of eight personal interviews from an interreligious perspective shows how hineni can be lived across interdenominational and interfaith lines."
Helen Rolfson, OSF, Professor Emerita of Theology, Saint John's University School of Theology/Seminary, Collegeville, MN


"This beautifully written and evocative book is a thoughtful consideration of spiritual direction, a meditation on presence and openness, and an acknowledgment of the gifts and transforming challenges for anyone who ministers through listening, anyone who desires to be in relationship to God."
The Catholic Library World


"I have read many interpretations of Genesis 22—the story of Abraham's near-sacrifice of his son, Isaac. I probably suspected all that could be said had been. Then Kasmir comes at it from a fresh angle, like Emily Dickinson's `tell all the truth, but tell it slant.'

"'I will not tell you how you should or could or ought or must respond hineni to the one before you. Rather, I offer a mirror for your own approach,' she says. Reading Kasmir may be for you, as it is for me, not just looking in the mirror, but going through the looking glass to a new adventure."

"Reading Alisa Kasmir's book felt like having a long and contemplative conversation with a close spiritual friend, while taking a long and restful walk alongside the seashore. It reads as a dialogue, seeking words for what it is, exactly: living a spiritual life and sharing this with others. Dogs pass by cheerfully, shaking off the salty water, awake in the moment.

"Kasmir crosses boundaries of Jewish and Christian traditions, and her account also resonates with traditions unmentioned, like the Hindu, Buddhist, and Islamic.

"I highly recommend this pleasant, musical, and personal read to those working in spiritual direction, as well as for spiritual practitioners looking to share and mirror their own experiences."