The Hermeneutics of The Saint John's Bible 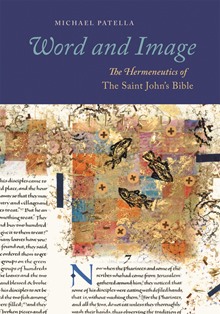 In Word and Image, Michael Patella explores the principles, intentions, and aims of The Saint John's Bible—the first handwritten and hand-illuminated Bible commissioned by a Benedictine abbey since the invention of the printing press. Patella focuses not on how it was made but on how it can be read, viewed, and interpreted in a way that respects biblical inspiration and Christian tradition in our postmodern context. It is a book that is sure to appeal to academics, pastors, teachers, and educated laypersons.

Patella considers this Bible in the context of the great Christian tradition of illuminated Bibles across the ages and also the fascinating ways The Saint John's Bible reflects third-millennium concerns. He seeks to rekindle interest in sacred art by allowing The Saint John's Bible to teach its readers and viewers how to work with text and image. As an accomplished Scripture scholar, a highly regarded teacher, a monk of Saint John's Abbey, and the chair of the Committee on Illumination and Text that provided the vision to the artists who created it, Patella may be the only one who could write this book with such insight, expertise, and love.

Michael Patella, OSB, SSD, is professor of New Testament at the School of Theology•Seminary of Saint John's University, Collegeville, where he also serves as seminary rector. His books include Angels and Demons: A Christian Primer of the Spiritual World (Liturgical Press, 2012), The Lord of the Cosmos: Mithras, Paul, and the Gospel of Mark (T&T Clark, 2006), and The Gospel according to Luke of the New Collegeville Bible Commentary Series (Liturgical Press, 2005). He has been a frequent contributor to The Bible Today and is a member of the Catholic Biblical Association. He served as chair of the Committee on Illumination and Text for The Saint John's Bible.

In an age of fragmentation and specialization, two worlds-of word and of image-have united to produce a thing of beauty: The Saint John's Bible. The creation of a handwritten Bible, in a world obsessed with speed made possible by ever-advancing technology, seemed a profound waste of time, yet the project has captured the imagination, not only of artists, but of all who have delighted in the beauty of The Saint John's Bible. Now in Word and Image we are led behind the scenes to delve into the theological underpinnings that nurtured the artists who produced The Saint John's Bible. Word and Image shows how the best of contemporary biblical interpretation informed the artists as they created images that reflect the biblical text for our day. It reveals how the theological and spiritual dimensions involved in reading and illuminating the biblical text can live in harmony, each building on the other. By giving us a deeper look into the produc tion of The Saint John's Bible, Fr. Michael Patella enhances our appreciation of this great work of art, but we also come away with a more profound understanding of the Bible itself as a source of theological and spiritual reflection.
Pauline A. Viviano Associate Professor of Theology, Loyola University Chicago

"Word and Image is grounded in solid scholarship but written with hospitality toward the nonspecialist. Patella's commentary helps to draw out some of the sometimes subtle aspects of The St. John's Bible, such as the commitment to juxtapose the biblical text with science without dismissing the observations of either. Patella serves as a helpful and insightful guide to the project's historical and hermeneutical foundations as well as to the Bible's images."
S. D. Giere, Review of Biblical Literature

"Michael Patella focuses not on how The Saint John's Bible was made but on how it can be read, viewed, and interpreted in a way that respects biblical inspiration and Christian tradition in our postmodern context. Patella considers this bible in the great Christian tradition of illuminated Bibles across the ages and also fascinating ways The Saint John's Bible reflects third-millennium concerns."
Theological Studies

The Saint John's Bible is a magnificent memorial of two millennia of Christianity. This volume by Fr. Michael Patella and his collaborators provides a useful framework for understanding both the project as a whole and the art that illuminates the Biblical text. It will be of interest to anyone concerned with the intersection of Scripture and the visual arts.
Harold W. Attridge Sterling Professor of Divinity Yale Divinity School

Word and Image: The Hermeneutics of The Saint John's Bible is an important text that comments and instructs upon the most essential and influential book in the world. Although it requires careful and prayerful thought, and will challenge some 'conservative' ideas, Patella's text is essential reading for pastors, liturgists, catechists, and anyone interested in how theology and arts intersect.
The Very Rev. Dr. Donald P. Richmond, OblSB, CCS