Commentary on the Rule of Saint Benedict 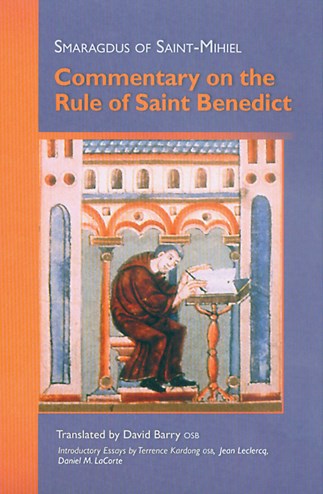 A ninth-century monk of Saint Mihiel near Verdun, Smaragdus composed his Commentary after the 816 Council of Aachen imposed the Rule of Saint Benedict on all monasteries in the vast Carolingian Empire. His deep devotion to Christ and great reverence for Saint Benedict led him to encourage monastics to update the observance of the Rule to meet the needs of a society, period of history, and monks very different from those Benedict had known. He reminds readers today as well as then that monastic life is organized for the goal of attaining union with God by following Christ.

David Barry OSB made solemn profession at the Abbey of the Holy Trinity, New Norcia, Western Australia in 1960. He has studied at Sant'Anselmo, Rome, and Saint Benet's Hall, Oxford, as well as at Murdoch University. In addition to doing parish work, teaching, working in monastic formation, and giving spiritual direction and retreats in Australia, he has also taught in China and done archival research in Europe on his monastery’s founders.

Thanks to David Barry, we can now pick up the first verse-by-verse commentary on the Rule of Saint Benedict, written close to 1200 years ago by Smaragdus of Saint Mihiel, and read it in English at our leisure. . . . The reader will find the introductory essays informative, provocative, and engaging, and the Commentary itself full of wisdom and rich history.
The American Benedictine Review

[P]rovides the modern reader with a fascinating view on ninth-century Frankish monasticism.
The Catholic Historical Review

Besides its obvious historical value, the book could be useful to formators in introducing young monastica to the Rule, or to anyone desiring to deepen understanding of it. Sections of it might even be read at Compline or one of the other Hours.
Cistercian Studies Quarterly

. . . a very well-presented, accessible and reliable version of a text which still resonates today, nearly 1,200 years after it was written.
Parergon