A Saint in the Sun

Praising Saint Bernard in the France of Louis XIV 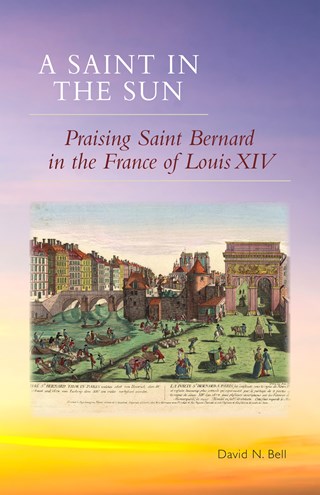 This volume contains translations or summaries of the most important panegyrics in praise of Saint Bernard that were preached during the reign of Louis XIV. Some of the preachers were and are regarded as the greatest orators ever to grace the French pulpit. All the translations are extensively annotated, and there are three introductory chapters providing a necessary background for appreciating the sermons. Sixteen preachers are represented, and, with one exception, none of the material has ever appeared in English. For those interested in the afterlife of Saint Bernard, as he was used, and sometimes abused, in the reign of the Sun King, this collection provides essential primary sources.

David N. Bell is professor emeritus of religious studies at Memorial University and a Fellow of the Royal Society of Canada. He retired as head of the Department of Religious Studies at the end of 2011. He has published some two dozen books, more than a hundred articles, and a great number of book reviews. His most recent book, published May 2014, is The Library of the Abbey of La Trappe: A Study of its History from the Twelfth Century to the French Revolution (Brepols).

"Bernard of Clairvaux, spiritual and doctrinal councilor of popes, prelates, and princes, vanished in scholastic theological debate to be remembered during the late Middle Ages for his Marian devotion and battles with the devil. A Saint in the Sun reveals the Bernard of eloquent and erudite seventeenth-century French preachers. Their Bernard was neither theologian nor mystic but austere penitent and ardent defender of authority. Those who read A Saint in the Sun in tandem with James France's The Medieval Images of Saint Bernard of Clairvaux may well be alerted by this chameleon of passing ages against narrowly viewing bygone saints and heroes in the light of the preoccupations of their own age."
Dr. E. Rozanne Elder, Professor Emerita, University of Michigan

"An admirable collection. Has the merit of being the first in its kind, but even more of showing through the particularly well-chosen mirror of the `icon of classical Catholicism' the virtues and vice of the Sun King's France, reflected in the various dimensions of St. Bernard's charism."
Analecta Bollandiana

"A brilliant narrative on and sourcebook of the ways in which French churchmen during the reign of the Sun King used the life of Saint Bernard in their homilies. Recommended for academic libraries supporting graduate work in French or religious history."
Catholic Library World

"Bernard of Clairvaux has not been well served by his admirers. From the time of Geoffrey of Auxerre and his first biographers, his rich and complex career has been plundered by image-makers with a view to advancing their own agenda. The panegyrists of the seventeenth century, studied in this volume, were no exception. They sought to make the saint a mouthpiece for their own well-intentioned priorities and, in the process, created an image of Bernard that would feed the prejudices of later generations. A Saint in the Sun makes available a selection of these largely inaccessible texts and provides a wealth of contextualizing detail. This masterly study will serve to make clear this important phase in the history of the reception of Bernard's writing. David Bell is to be congratulated for throwing light on this neglected area of scholarly research."
Michael Casey, OCSO, Tarrawarra Abbey, Australia

"This volume is vintage David Bell. It brims with verve and erudition. With its informed introductions and rich explanatory notes, Bell's collection of grand-siècle representations of Bernard of Clairvaux offers valuable insights for anybody interested in the fate of the medieval Cistercian through the ages or the religious landscape of Early Modern France."
Mette Birkedal Bruun, Professor of Church History, University of Copenhagen