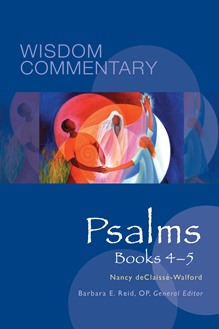 In this close reading of Psalms 90-150, Nancy L. deClaissé-Walford discovers meanings in the Psalms that were "there all along" but hidden beneath layers of interpretation built up over the centuries. Approaching the canonical storyline of the Psalter with feminist-critical lenses, she reads against the dominant mind-set, refuses to accept the givens, and seeks to uncover a hidden/alternate/parallel set of societal norms. DeClaissé-Walford attends to how context affects the way hearers appropriate the Psalter's words: women, for the most part, hear differently than men; women of privilege differently than women living in poverty. Her interchanges with students and scholars in post-apartheid South Africa bring the biblical text alive in new ways for today's believers.

Nancy L. deClaissé-Walford is the Carolyn Ward Professor of Old Testament and Biblical Languages at the McAfee School of Theology at Mercer University in Atlanta, Georgia. She holds a PhD in biblical studies from Baylor University and is the author of several articles and books on the Psalms. DeClaissé-Walford is an active participant in and part of the steering committee of the Book of Psalms Section of the Society of Biblical Literature and is also the Old Testament editor for the Word Biblical Commentary series.