A Monastic Vision for the Twenty-First Century

Where Do We Go from Here?

Edited with a Foreword by Patrick Hart, OCSO 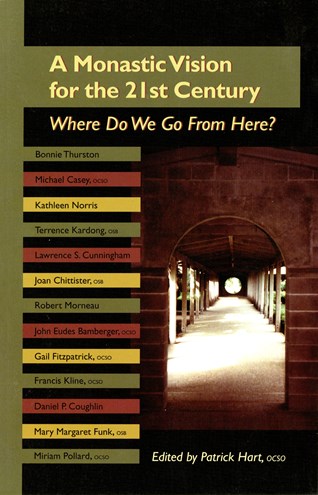 An ancient lifestyle which has been adapted, renewed, and is still being followed today, monasticism appears to some outside it as a quaint anachronism and to others as the sanest of all ways of living. Can it survive in the post post-modern world? A dozen insiders and outsiders’monastics, academics, clergy, laypersons, hermits, cenobites, poets, and writers’offer their reflections on the future of the monastic life of prayer and community. Contributing their insights are Michael Casey, Kathleen Norris, Lawrence Cunningham, Terrence Kardong, Bonnie Thurston, John Eudes Bamberger, Joan Chittister, Mary Margaret Funk, Gail Fitzpatrick, Francis Kline, Daniel Coughlin, Robert Morneau, Miriam Pollard, and Bernardo Olivera.

Patrick Hart, OCSO, a native of Green Bay, Wisconsin, did his undergraduate work at the University of Notre Dame as a Brother of Holy Cross. He entered the Abbey of Gethsemani in 1951, and has served as secretary to the last four abbots, as well as to Thomas Merton during the last year of his life. He has edited many books by and about Thomas Merton during the 38 years since the latter’s death on December 10, 1968. He has served on the Board of Directors for Cistercian Publications for the past 30 years, and was appointed General Editor of the new Monastic Wisdom Series following the alliance between CP and Liturgical Press at Collegeville in May of 2004. He was awarded an honorary Doctorate in Humane Letters from Bellarmine University in 2004.

When a monk wonders out loud in a group of monastics and others interested in monasticism and its future, vigorous and enlightening discussion often ensues. This collection of essays results from questions posed in such a setting: what can church and world expect from monasticism in the twenty-first century? How might it be ideally incarnated for the future? Between the bookends of a sharply focused introduction and a poetic lectio on the Easter proclamation, readers discover a wide variety of responses by Cistercian and Benedictine men and women and other writers who, though not members of monasteries, have had long-standing experience and association with monasticism.
American Benedictine Review

Karl Rahner's observation that in the future, Christians will be mystics or they will be nothing at all, might well summarize the `vision' for monastics in this volume of essays, A Monastic Vision for the Twenty-first Century. Through a wide variety of approaches, the one underlying theme seems to be that the search for God in prayer and communal living is essential to monastics living in any century.
Benedictines

A Monastic Vision for the 21st Century is highly recommended to those interested in the future of Benedictine and Cistercian monasticism.
Curled Up With A Good Book

In this thought-provoking study Brother Patrick Hart, former secretary to Thomas Merton, has drawn from a notable list of collaborators a full spectrum of ideas on the future of monasticism. . . . Thomas Merton's ideas permeate this compilation, as contributors frequently cite the renowned Trappist monk. Readers who, like them, are far from ready to pull down the curtains on monastic life will be pleased to find these pages filled with new seeds of contemplation.
America

The essays all, in their various ways, look at the present, asking what is the real value of monastic life? What is proving to be most attractive and enduring? This is realistic and at the same time an inspiration. All the essays are excellent and would bear several readings.
Quarterly Review of the Community of the Resurrection

In their approach to the question, the style of writing and starting points, these authors make for a varied collection . . . they are ready to face what they see as hard choices needed for monasticism to continue to offer a vision to others.
The Downside Review