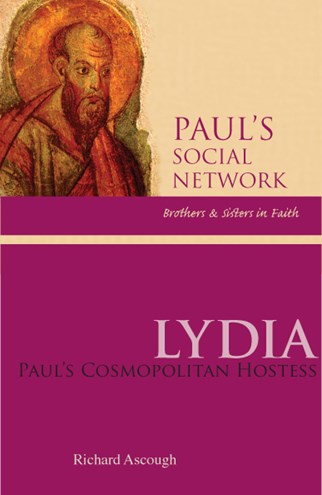 Human beings are embedded in a set of social relations. A social network is one way of conceiving that set of relations in terms of a number of persons connected to one another by varying degrees of relatedness. In the early Jesus-group documents featuring Paul and coworkers, it takes little effort to envision the apostle’s collection of friends and friends of friends that is the Pauline network. The persons who constituted that network are the focus of this set of brief books. For Christians of the Western tradition, these persons are significant ancestors in faith. While each of them is worth knowing by themselves, it is largely because of their standing within that web of social relations woven about and around Paul that they are of lasting interest. Through this series we hope to come to know those persons in ways befitting their first-century Mediterranean culture.

Women played a prominent role in the development of the early Jesus communities and formed an essential part of Paul’s social network. Lydia was one such woman. Her heart was opened to Paul's message, she responded with faith by being baptized, and she offered her home in hospitality to Paul and his companions. But beyond this not much is known of her. In Lydia: Paul’s Cosmopolitan Hostess, Richard S. Ascough constructs an image of Lydia based on what is known about the political, commercial, social, and religious norms of the first-century world. Ascough describes the styles of possible dwellings in which Lydia could have lived, the business opportunities that would have been available to her, and the religious cults that held sway in Philippi at the time. With Ascough, readers will find that the importance of Lydia's story is that she hears the message of God through Paul and responds with faith.

Richard S. Ascough is associate professor of New Testament at Queen's Theological College, Kingston, Ontario. He is the author of numerous articles and essays on the documents and contexts of the early Jesus believers, particularly their community structures. His books include: Passionate Visionary: Leadership Lessons from the Apostle Paul (with Sandy Cotton, Novalis/Hendrickson, 2005), What Are They Saying About the Formation of Pauline Churches? (Paulist Press, 1998), and Paul’s Macedonian Associations (Mohr Siebeck, 2003).

Richard Ascough's in-depth knowledge of history and Scripture guide his disciplined imagination to create a thick description of the woman named Lydia. Her two cameo appearances in the Acts of the Apostles leave contemporary readers yearning for more. Readers of Lydia: Paul's Cosmopolitan Hostess will come away with a focused and detailed rendering of first century lifeways in Philippi, the place of women within the world of the Roman Empire, and an appreciation of how the message of Jesus took hold and grew. Lydia, thanks to Ascough's careful research and reading, emerges as a deeply spiritual and worldly-wise figure relevant to 21st century women and men. This book will intrigue all sensitive and curious readers of the New Testament.
Dr. Peter Gilmour, Professor Emeritus, Loyola University, Institute of Pastoral Studies

Although Lydia only appears briefly in Acts, Richard Ascough, an expert on Paul and the formation and function of ancient associations, explores the various roles and social contexts of this cosmopolitan character from Asia Minor. In doing so, the author provides the reader not only an engaging introduction to Lydia, but to the various ways in which women figured importantly within Paul's social network. In keeping with the series, Ascough writes with consistent attention to ancient Mediterranean cultural and social contexts such that we can appreciate this intriguing figure within her own world. This was a very enjoyable book.
Alicia Batten, Associate Professor of Religious Studies, University of Sudbury

Richard S. Ascough gives readers the best picture he can of one of history's behind the scenes players. Lydia is well worth the read for Christian scholars and those simply intrigued by the history of early Christianity.
Midwest Book Review

Lydia: Paul's Cosmopolitan Hostess is a highly readable, comprehensive, and absorbing introduction to a fascinating figure within the community supporting Paul. This small jewel of a book provides substantial access to the most recent research into the social web of relations that characterized the Pauline network, focusing in particular on the roles women could and did play, and the shape of the domestic and public spaces they inhabited. Ascough does an excellent job of presenting multiple sources and background information, thus allowing readers to come to their own conclusions. This book is a marvelous addition to the study of Paul and will be an essential resource in a variety of contexts where people are studying Paul and the world he inhabited.
Mary E. Hess, Associate Professor of Educational Leadership, Luther Seminary, St. Paul, MN

[A] treasure-trove of historical information on [Lydia's] identity, the city of Thyatira, the Philippian assembly of believers, her household, the nature and role of woman in first-century business, and much more. . . . Anyone preaching through the journeys of Paul will find it a helpful resource.
The Master's Seminary Journal

Ascough is well versed in the social-scientific method and his broad knowledge of Paul's social world helps make this thin book very readable and interesting. Readers will go away wanting to know more, not only about Lydia but about the series.
Catholic Library World

Richard Ascough's Lydia is a marvelous work of erudition and clarity, which uses the little-known figure of Lydia to elaborate important aspects of the social world of the earliest Jesus movement. We learn about mobility, life in a Roman colony, Mediterranean family structures, slavery, the nature of marriage, civic values, private patronage, household piety, and the public and private roles of women. Ascough deftly sketches the Mediterranean world of ancient Christianity through the eyes of one women of Philippi.
John S. Kloppenborg, Professor and Chair, Department & Centre for the Study of Religion, University of Toronto

Ascough engages in an absolutely fascinating bit of detective work and brings Lydia, a Pauline co-worker, into sharp relief. Ascough builds on the scant evidence in Acts and concludes that Lydia had found liberty from her guardians (males), had freedom to take care of her own affairs, and had the independence to run her own household. She was a merchant trader and householder, who was active in the network of Paul's coworkers as host and patron to the Jesus group in Philippi. This is an excellent book that demonstrates the utility of social-scientific models.
Dietmar Neufeld, Associate Professor of Christian Origins, Associate Head of Classical, Near Eastern, and Religious Studies, University of British Columbia

Ascough's reconstruction of the person and role of Lydia is always possible, and indeed, plausible.
Religious Studies Review

Ascough . . . manages to use every scrap of Luke's description to help situate this early follower of Paul in her social, cultural, and religious context. Readers will not only rediscover this enticing New Testament character but learn a lot about the context of early Christianity.
The Bible Today