Jews, Christians, and Muslims at the Fortress Tomb 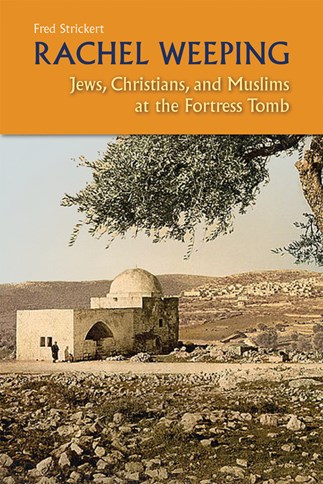 Rachel’s story is one of the great dramas of the Old Testament. It begins with a passionate love story’the shepherdess meets Jacob at the well and he is moved to weep and kiss her. So great is Jacob’s love for Rachel that he works seven years for her hand in marriage and then, tricked into marrying her sister Leah, he works another seven years for Rachel. After years of heartbreaking barrenness, Rachel gives birth to Joseph. While giving birth to her second son, Benjamin, Rachel dies on the way to the family’s new home. She is buried there beside the road, not in the family tomb. The very nature of Rachel’s burial site means she will be a dramatic figure weeping for the Israelites as they are led into captivity by the Babylonians, and again for the children massacred by Herod after Jesus’ birth.

It is this on-the-way character of Rachel that marks her story and the monument outside Bethlehem where Christian, Jewish, and Muslim worshipers remember her. The monument is tangled in questions of historical authenticity and sectarian struggle. For centuries it has been passed by, recorded in diaries, worn by earthquakes and neglect, and embellished by members from all three traditions. Finally, in the early twenty-first century, it has been surrounded by a wall, cut off from the very road that brought pilgrims by for so many years. Yet pilgrims continue to gather, and women come to pray for the blessing of childbirth. In Rachel Weeping, Fred Strickert takes the reader on a journey into the nature and significance of Rachel’s story and the story of her tomb. With meticulous scholarship and a clear sense of how the monument fits into the current history of the Middle East, Strickert tells the story of Rachel, the woman on the way.

Fred Strickert is Professor of Religion at Wartburg College in Waverly, Iowa. He is the author of Bethsaida: Home of the Apostles (Liturgical Press).

Readers will come away from Strickert's treatment with an appreciation of how a literary character such as Rachel ties all three faith traditions together. They will also glean a new appreciation of how, in the pathos of the current political situation, the ancient image of Rachel's weeping takes on an entirely new significance.
Biblical Interpretation

In a careful and judicious way, Fred Strickert shows how a particular figure in the Bible can become a generative interpretive force. Along with suggestive exegesis and some historical-archaeological work, `Rachel' becomes variously an example of divisive ideological monopoly or a reference point for hopeful, generative women. Like so much in our religious vocabulary, `Rachel' is open to rich imaginative reuse. The book is an exercise in `reception history' that will challenge any notion that biblical usage has a single, identifiable meaning. In this case, the weeping of mother Rachel moves beyond the book to become a venue for both violence and hope. Strickert manages complex material in suggestive way, much to our benefit.
Walter Brueggemann, Columbia Theological Seminary, Decatur, Georgia

Strickert's approach is both historical and contemporary. He puts the past at the service of the present in hopes of helping to create a more peace-filled future. . . . It's a small gem worth reading.
Catholic Studies

This is a book which intermingles beauty and pathos. . . . A book of serious biblical scholarship, but also engaged with present day realities, and a salutary reminder that the book of Genesis still has the power to affect our world for good or ill even in the twenty-first century.
Journal for the Study of the New Testament

Fred Strickert has made a unique contribution to the ongoing discussion about the relationships among members of the three monotheistic faiths. He explains the important role Rachel has in Judaism, Christianity, and Islam, and he explores how her tomb has functioned as a pilgrimage site throughout history. This creative interfacing of person and place is simultaneously a celebration of how people have cooperated in the past and a challenge to reflect on how we might get along better in the future.
John Kaltner, Department of Religious Studies, Rhodes College, Memphis, Tennessee

With Rachel Weeping Fred Strickert joins a growing pool of scholars and journalists who illuminate the shared religious heritage of Jews, Christians and Muslims. What distinguishes this story of Rachel's tomb in biblical and modern history is Strickert's attention to extensive and diverse sources such as rabbinic, patristic, and Islamic commentaries and eye witness accounts by two millennia's pilgrims. Strickert's integration of biblical narrative, history, and archaeology lifts up Rachel's tomb as a paradigm for the political developments in our time that hinder the sharing of God's Holy Land by the people of these three related traditions.
Carol Schersten LaHurd, Ph.D., Lutheran School of Theology, Chicago, Illinois, Evangelical Lutheran Church, America Global Mission

The book includes an excellent bibliography that even references contemporary political press coverage, as well as useful indices.
Interpretation

[C]arefully weaves together the textual, historical, and political dimensions of the site, and it tells the story not only of Rachel but of all those who have gone looking for her in memory and in faith.
Review of Biblical Literature