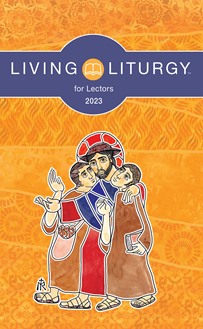 This practical pastoral resource provides helpful formation and guidance for lectors and proclaimers of the Word. Beginning with the First Sunday of Advent 2022, Living Liturgy™ for Lectors includes the following:

Paul-Vincent Niebauer, OSB, is a Benedictine monk of Saint John’s Abbey. He possesses a Bachelor’s degree in theatre and secondary education from the University of Wisconsin-Madison and an MA in directing from the Chicago School of Performing Arts at Roosevelt University. Since 1995 he has taught and directed theatre at Saint John’s Preparatory School. Br. Paul-Vincent has also directed for the Saint Cloud Civic Theatre and the College of Saint Benedict/Saint John’s University Opera Workshop. He also serves as communications and marketing director and vocation team leader for Saint John’s Abbey in Collegeville, Minnesota.

Jessie Bazan helps Christians explore their life callings in her work with the Collegeville Institute for Ecumenical and Cultural Research. She is editor and coauthor of Dear Joan Chittister: Conversations with Women in the Church (Twenty-Third Publications) and a regular columnist for U.S. Catholic magazine. Her work has also appeared in the National Catholic Reporter and on Catholic Women Preach. She holds a master of divinity from Saint John's School of Theology and Seminary.

Jessica Mannen Kimmet is a freelance writer and liturgical musician. Formerly a full-time college campus minister, she now spends her days overseeing a domestic church and the growth of her three young sons. Originally from Oregon, she has spent most of her adult life in the Midwest, with the exception of two years of ministry in Wexford, Ireland. She holds a BA in theology and music theory and a master of divinity, both from the University of Notre Dame.

Father Ruberval Monteiro da Silva, a Benedictine monk, was born in Rolândia in the South of Brazil. He began praying with art during his novitiate year of religious formation and later earned a doctorate in theology and Christian iconography. Fr. Monteiro da Silva has created works in churches and chapels throughout Europe and teaches liturgy and arts at the Pontifical Liturgy Institute of Rome.