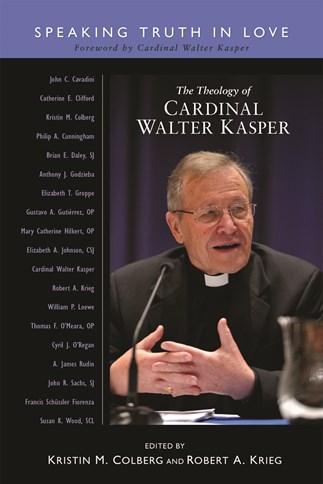 The Theology of Cardinal Walter Kasper

Cardinal Walter Kasper's contributions to theology, ecumenism, Jewish-Christian relations, and the pastoral life of the church have shaped Catholicism in the twentieth and twenty-first centuries. Acknowledging this, Pope Francis has praised Kasper's "profound and serene" theology.

In The Theology of Cardinal Walter Kasper: Speaking Truth in Love, leading theologians from across the United States and Canada explore the full scope of Kasper's thought on topics such as the character of ecumenical and interreligious dialogue, Christology, theological method, and the nature of the church-world relationship. Kasper himself presents four previously unpublished texts: on the interpretation of Vatican II, on forgiveness, on Christian hope, and on the approach to theology today.

This volume originated at a conference, at which Kasper was an active participant, in honor of his eightieth birthday. It provides an introduction to Kasper's thought and also an overview of major issues in contemporary Catholic theology.

Kristin M. Colberg is assistant professor of theology at Saint John's University and the College of Saint Benedict. She received her doctorate at the University of Notre Dame and is the author of several articles on the Second Vatican Council that have appeared in journals such as The Heythrop Journal, Horizons, and Missiology. She serves as a member of the Catholic-Reformed dialogue in the United States and has known Cardinal Kasper since 2003.

Robert A. Krieg received his doctorate from the University of Notre Dame in 1976 and has taught there since 1977. He is the author of several books, including Treasure in the Field: Salvation in the Bible and in Our Lives (Liturgical Press, 2013). Krieg has published articles in America, Comment, Commonweal, The Heythrop Journal, The Irish Theological Quarterly, The Journal of Religious Thought, Theologische Quartalschrift, Theological Studies, and Worship. He has known Cardinal Kasper since 1980.

I am currently reading the edited volume of the papers from the Kasper symposium at Notre Dame. It is stunning—important, lucid, interesting, a document of record.
Paul Philibert, OP, Research Theologian, Aquinas Institute of Theology


Walter Kasper is a gentle giant within the Catholic community, within ecumenical circles, and within the Catholic-Jewish dialogue. What is unique about this Festschrift is the ordering of the essays, the consistently high standard of the contributions, and the constructive engagement with the work of Kasper over a period of fifty years. This collection reads like a mini-summa of what is best in Catholic theology. We are indebted to the careful work of the editors in putting together this handsome volume.
Dermot A. Lane, Mater Dei Institute of Education, Dublin City University, Ireland


This is the best introduction, in either English or German, to the work of one of the most important Catholic theologians in the last half century, Cardinal Walter Kasper.
Catholic Library World


The overall impact of reading this book, for this reviewer at least, was akin to what might be appropriately called "an Emmaus experience." Not until the last 50 of its 300-plus pages does the reader "hear" from Kasper himself. And it's well worth the wait! . . . [T]he reading of this book may indeed trigger "an Emmaus experience" for the reader, especially in terms of how Cardinal Kasper's approach to theology may show itself as so much more than one had hoped for or imagined.
Conrad T. Gromada, PhD, Emmanuel


The overall impact of reading this book, for this reviewer at least, was akin to what might be appropriately called "an Emmaus experience." Not until the last 50 of its 300-plus pages does the reader "hear" from Kasper himself. And it's well worth the wait. . . . The reading of this book may indeed trigger "an Emmaus experience" for the reader, especially in terms of how Cardinal Kasper's approach to theology may show itself as so much more than one had hoped for or imagined.
Conrad T. Gromada, Emmanuel


This is a welcome and timely volume. . . . The various contributors help to situate Kasper solidly within the long line of great Tübingen theologians, particularly those who have influenced ecclesiology, Pneumatology, and the cause for Christian unity. . . . I highly recommend this very helpful and timely Festschrift.
Eric W. Hendry, Catholic Books Review


Warm thanks to Krieg and Colberg for editing these fifteen brilliant essays, describing the insights of the acclaimed cardinal-theologian Walter Kasper, shared at the University of Notre Dame colloquium (which I happily attended!) to celebrate his eightieth birthday. These North American professors provide a trusty GPS to navigate his doctrinal, ecumenical avenues while suggesting some still-unexplored lanes.
Michael A. Fahey, SJ, Scholar in Residence, Fairfield University, CT


In this remarkable Festschrift, some of today's most distinguished theologians explore the achievements of Cardinal Walter Kasper as a systematician, a contributor to the ecumenical movement, and a leader in Jewish-Christian relations. Lucid and readily accessible, these essays will benefit both students and professional scholars. Personal anecdotes from Kasper's former students, colleagues, and dialogue partners complement the volume's general introduction to his life and career. The volume ends with three contributions from Kasper himself, so that its dialogue about Kasper becomes a dialogue with Kasper. This book deserves a place in every theological library.
Julia Fleming, Professor of Theology, Creighton University


Cardinal Walter Kasper is undoubtedly a major figure in the church today, standing tall among contemporary theologians, epitomizing the theologian's task of mediating between the Christian tradition and contemporary culture. This book, which includes insightful surveys of Kasper's work by a stellar array of leading North American theologians as well as personal and pastoral statements by Cardinal Kasper, presents an excellent account of Kasper's theology-as consistently pastoral and insistently ecclesial-and his vision of the church in dialogue with the world. In all, it attests to Kasper's unswerving commitment to `speak truth in love,' in service of God and of Christian faith, both within the Catholic communion and beyond it, through his remarkable contribution to the cause of Christian unity and in the promotion of Christian-Jewish relations. With its origins in a 2013 conference held at the University of Notre Dame, Indiana, this most welcome book will surely serve as a useful reference for evaluating Cardinal Kasper's extraordinary contribution as churchman, theologian, and pastor to the church, academy, and society.
Anne Hunt, Executive Dean, Faculty of Theology and Philosophy, Australian Catholic University


This volume deserves to be highly recommended to the general reader as well as to the specialist. Hopefully, it will lead us to read Kasper himself.
Noel O'Sullivan, Maynooth, The Furrow


The Theology of Cardinal Walter Kasper is an exceptional volume from a remarkable range of leading scholars. As an introduction to a man who has served the church in so many capacities, this overview offers a unique vista on Catholicism over the span of Kasper's career through his writing in diverse areas of systematic theology. We see the mastery of Kasper through the lens of his scholarly admirers who together make a compelling case for the significance of the cardinal for his church and for its future.
Jeannine Hill Fletcher, Fordham University


For much of the twentieth century Walter Kasper was overshadowed by theological greats such as Rahner, Schillebeeckx, von Balthasar and Lonergan. Now is his time to emerge from the shadows to be revealed as a first class theologian and exemplary churchman. This volume with contributions from leading Christian and Jewish theologians, and recent essays by Kasper himself, reveal the depth of his contribution both to theology and to the life of the Church in the modern age.
Neil Ormerod, Professor of Theology, Australian Catholic University