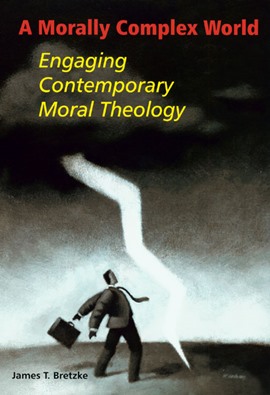 How can people celebrate the gospel of life in their daily lives? What about cloning? Is euthanasia morally acceptable in certain cases, such as terminal illness? In case of health reasons, mental illness, pregnancy due to rape, etc., is abortion morally acceptable? Are you in favor of the use of contraceptives, both natural and artificial?

A Morally Complex World will not answer such complex questions in detail, but it does provide a framework for trying to grapple better with the first question of how we should lead our moral lives in general, as well as some of the concrete ethical issues the other three questions raise. A Morally Complex World is an accessible introduction to moral theology covering the methodology of moral theology; basic concepts such as conscience and moral agency; natural law, moral norms; how the Bible can be used in Christian ethics; how to dialogue on contested ethical issues; how to consider sin and moral failure; and finally, how to mediate moral principles and moral teaching in a pastorally sensitive manner in concrete life situations.

Chapters are Mapping a Moral Methodology, The Natural Law and Moral Norms: Moving Along the Rational Claim Axis, Scripture and Ethics: Moving Along the Sacred Claim Axis, The Sanctuary of Conscience: Where the Axes Intersect, Modes of Moral Discourse: Navigating Towards a Common Ground, Navigating in the Morally Complex World: Casuistry with a Human Face, and Sin and Failure in a Morally Complex World.

James T. Bretzke, SJ, STD, is associate professor of theology and religious studies at the University of San Francisco, and an adjunct professor of moral theology at the Jesuit School of Theology-at-Berkeley. He has written three books, including Consecrated Phrases: A Latin Theological Dictionary, published by Liturgical Press, which won an award from the Catholic Press Association. He has also authored over fifty articles and scholarly reviews in the areas of Roman Catholic moral theology and cross-cultural ethics.