The Symbols of the Church 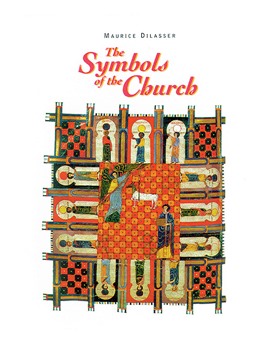 Science has its own language; the arts have another. Religion uses the language of the arts, for it uses signs and symbols, like bridges from the visible to the invisible. The symbol is not an object of worship but invites us to worship. It leads to an encounter with the divine. Richly illustrated, The Symbols of the Church shows that the language of symbols is more universal than the language of words in expressing faith. Over 200 full-color photographs and illustrations depict a variety of symbols that range from bells to architecture to liturgical vestments. Commentary, poetry, scriptural text, prayers, musical excerpts, and quotes from well-known persons offer insight into the meaning and history of these symbols.

The Symbols of the Church looks both beyond the church building and deep within it to find symbols relevant to Judeo-Christianity. First it recalls those principal sacred symbolssun, moon, stars, architectural figures, time, spacewhich various cultures have made into a permanent and universal religious language and which were known to the Christian Church. Then it presents the evolution of the church building through time, from ancient temples to the modern church. Finally, it explores church furnishings and featuresthe baptistry, the nave, the organ, sacred vessels, the vestiture of church ministersthat are "permanent church signs."

Churches are a compendia of symbols. The celebrations which take place in them enact these symbols. Their interpretation cannot be improvised but is a product of the interpretation given by the Church throughout its history and in its teaching and liturgy. The Church turns to the more widely used symbols of religious language to express its faith and dispose each person to receive its vision of the churches. The Symbols of the Church offers a beautiful and thoughtful introduction to their symbolic meaning.

Part One: Symbols of the Christian World includes the sections "The World and Its Image," "The Inhabitants of the Heavenly and Terrestrial Worlds," "The World Subject to Humanity," and "Elements, Space, and Time." Topics included in these sections are The Heavenly Circle; The Depths; The Square of the Earth; The Ascent of the Heights; Temple; God of the Universe and Holy Trinity; Jesus Christ, God in our Midst; The World of Humanity; World of the Spirits; The Animal Kingdom; Plant World; Products of the Earth; Objects; Elements; Colors; Numbers; and Time.

Part Two: Church Symbolism includes the section "Evolution of Churches and Their Symbolism." Topics included in this section are: Foreshadowings; The First Places of Worship; The Basilica; Romanesque and Cistercian Symbolism; Gothic Symbolism; Sixteenth-Century Churches; Classical and Baroque; Mid-Eighteenth and Early Nineteenth Centuries; Nineteenth Century and First Half of the Twentieth Century; and A Symbolism for New Churches.

Part Three: Permanent Church Signs includes such topics as Consecration and Symbolism of a Church; Surroundings That Are Considered Sacred; The Church in Its Setting; Voices of the Churches; The Gates; The Baptistry, a Door onto Another Life; The Nave; The Organ; The Signs of the Paintings, Stained-Glass Windows and Statues; Sanctuary, Choir; The Celebration of the Word; The Altar; The Luminary; The Reserved Eucharist; Sacred Vessels for the Celebration of the Sacraments; and Liturgical VestmentsThe Study of Vestments.

Glossaries are included for the following subjects: Vocabulary of Symbolism; The Bible: Source of the Judeo-Christian Symbols; Liturgical Books and the Interpretation of Sacramental Symbolism; SacramentsApplication of the Symbolic Language; Eucharistic Vocabulary; The Heavenly Church, the Triumphant Church, the Church of the Saints; Vocabulary for Buildings; and Architectural Vocabulary. A complete text index is included as well as an index to illustrations.

A rich resource booklavishly illustrated with examples from many countriesto delight the eye and instruct the mind. Its wide-ranging glossaries are a Godsend, saving our embarrassment by explaining all those terms we've always been hazy about. Newcomer and rusty old-timer alike will find within it treasures both old and new.
The Rev. Richard Giles, Dean, Philadelphia Episcopal Cathedral, Author of Re-pitching the Tent: Reordering the Church Building for Worship and Mission

Dilasser's The Symbols of the Church is one of those rare books that makes the connections and allows the rich dimensions of Bible, nature, and human experience to emerge from the treasury of ecclesial symbols. Here the church's iconography and liturgical rites shine with new splendor. This book is a feast for the eyes as well as a spiritual banquet for the heart.
Paul Philibert, OP, Director, The Institute for Church Life