The Prayers of the New Missal

A Homiletic and Catechetical Companion 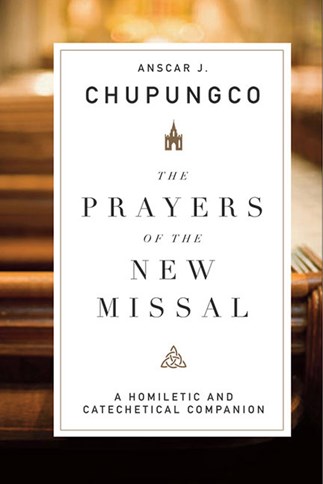 After the publication of The Roman Missal, Third Edition, much attention was given to the catechesis of the clergy and the faithful on the Order of Mass, which contains the chief theological and spiritual elements of the eucharistic celebration. In The Prayers of the New Missal, Anscar J. Chupungco expands the reader's focus to the other parts of the Mass—namely, the orations or the Collect, Prayer over the Offerings, Prayer after Communion, and Prayer over the People. He demonstrates that these elements, too, are a rich source of doctrine and spirituality waiting to be shared with others through homily and catechesis.

Preachers and catechists will especially appreciate Father Chupungco's recommendations for approaching the difficult and sometimes vexing structure and vocabulary of the new Missal. He offers helpful exercises for analyzing the Latin texts, comparing the original and the English versions, and crafting provisional literal translations that will aid in easier comprehension. Finally, he concludes with an ample sampling of homiletic and catechetical notes that will serve as a rich source of nourishment for preaching and catechesis.

Anscar J. Chupungco, OSB, who passed away in 2013, was a member of the Abbey of Our Lady of Montserrat in the Philippines. He was president of the Pontifical Liturgical Institute in Rome and is currently director of Paul VI Institute of Liturgy in the Philippines. In 2011, the Federation of Diocesan Liturgical Commissions presented to him the Frederick R. McManus Award for his contribution to pastoral liturgy. He authored many books, including What, Then, Is Liturgy? Musings and Memoir (Liturgical Press, 2010).

This unique and helpful little book will be a great benefit to priests preparing for the Eucharistic liturgy and to the laity seeking a deeper insight into the Mass prayers.
Catholic Library World

Reading this short work by the late Anscar Chupungco only takes a few hours; ingesting his rich theology and spirituality takes a lifetime. Selecting presidential prayers that are difficult to understand in the new translation, Fr. Anscar first looks at a text in its original Latin and present English translation, suggests a renewed translation, and then offers insightful and stirring homiletic and catechetical insights. It is especially in the latter that Fr. Anscar's love of liturgy comes through. He is a master at drawing us into that same love of liturgy, and at showing how the paschal mystery unfolds through the liturgical year.
Joyce Ann Zimmerman, CPPS, Director of the Institute for Liturgical Ministry, Dayton, Ohio

This is an exceptional posthumous gift from a celebrated scholar and liturgist. All of his skills as a brilliant Latinist and translator are on display as Fr. Chupungco lucidly cracks open the sometimes opaque prayers of the new Roman Missal. Yet more than a talented linguist, this is a treasured gift from an instinctive teacher and preacher, who prods his students and hearers into the heart of the mystery refracted in the liturgy he so deeply loved.
Edward Foley, Capuchin, Duns Scotus Professor of Spirituality, Professor of Liturgy and Music, Catholic Theological Union

Filled with great insight on some of the more difficult to understand Collects in the English translation of The Roman Missal.
Pastoral Liturgy